You are here: Home / Projects / ABSTRACTS OF PAPERSThe Journal of Pharmacology and Experimental Therapeutics 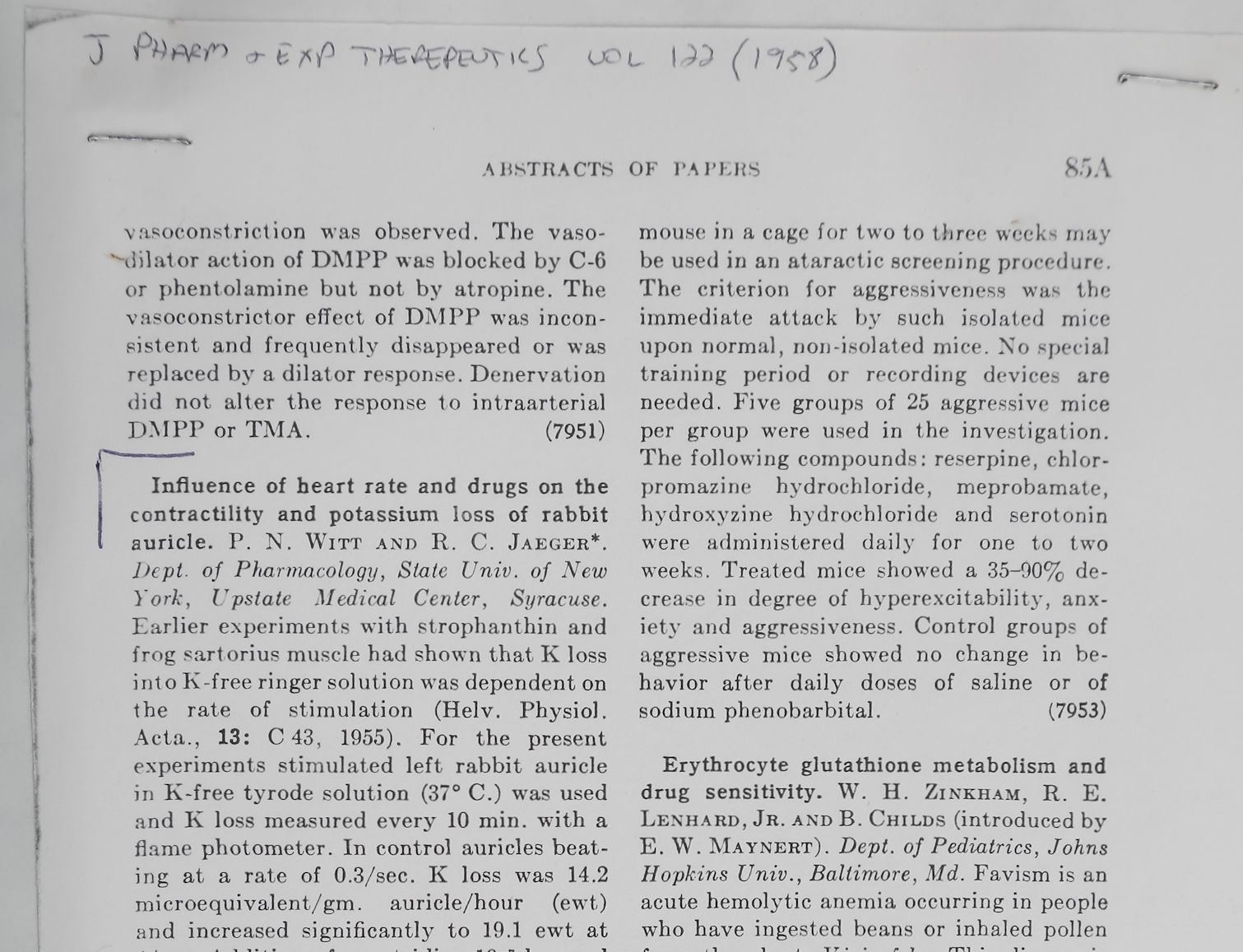 vasoconstriction was observed. The vasodilator action of DMPP was blocked by C-6 or phentolamine but not by atropine. The vasoconstrictor effect of DMPP was inconsistent and frequently disappeared or was replaced by a dilator response. Denervation did not alter the response to intraarterial DMPP or TMA.    (7951)

Influence of heart rate and drugs on the contractility and potassium loss of rabbit auricle. P. N. Witt and R. C. Jaeger*. Dept, of Pharmacology, State Univ. of New York, Upstate Medical Center, Syracuse. Earlier experiments with Strophanthin and frog sartorius muscle had shown that K loss into K-free ringer solution was dependent on the rate of stimulation (Helv. Physiol. Acta., 13: C 43, 1955). For the present experiments stimulated left rabbit auricle in K-free tyrode solution (37° C.) was used and K loss measured every 10 min. with a flame photometer. In control auricles beating at a rate of 0.3/sec. K loss was 14.2 microequi valent/gm. auricle/hour (ewt) and increased significantly to 19.1 ewt at 4/sec. Addition of veratridine 10“7 lowered significantly K loss at 1/sec (control 17.1, veratridine 13.3 ewt); however, at a rate of 2/sec. the veratridine muscle lost significantly more K than the control (control 15.5, veratridine 19.5 ewt). The effect of veratridine on contractility was also dependent on rate of stimulation, it increased contractility at the end of 60 min. at low rates and decreased it at high rates. In our experiments a process involved in K movements with different activity at different rates seemed to be influenced critically between 1 and 2 beats/sec. The dissociation between changes in K loss and tension (confirmed in experiments with epinephrine) indicates that other factors besides K loss are responsible for inotropic drug action.

mouse in a cage for two to three weeks may be used in an ataractic screening procedure. The criterion for aggressiveness was the immediate attack by such isolated mice upon normal, non-isolated mice. No special training period or recording devices are needed. Five groups of 25 aggressive mice per group were used in the investigation. The following compounds: reserpine, chlor-promazine hydrochloride, meprobamate, hydroxyzine hydrochloride and serotonin were administered daily for one to two weeks. Treated mice showed a 35-90% decrease in degree of hyperexcitability, anxiety and aggressiveness. Control groups of aggressive mice showed no change in behavior after daily doses of saline or of sodium phenobarbital.    (7953)

Erythrocyte glutathione metabolism and drug sensitivity. W. H. Zinkham, R. E. Lenhard, Jr. and B. Childs (introduced by E. W. Maynert). Dept, of Pediatrics, Johns Hopkins Univ., Baltimore, Md. Favism is an acute hemolytic anemia occurring in people who have ingested beans or inhaled pollen from the plant, Vicia faba. This disease is seen most often in persons from the Mediterranean littoral, has a familial tendancy, and moré commonly affects males. Such a racial, familial and sexual distribution suggested that red cells of these patients may have a defect similar to that observed in people with primaquine-, nitrofurantoin-, or naphthalene-induced hemolytic anemia. This defect is characterized by a reduction of whole blood glutathione (GSH), a marked decrease in GSH after incubation of whole blood with acetylphenylhydrazine (APH), and a deficiency of glucose-6-phosphate dehydrogenase activity. Red cells from two Greek patients who had been hospitalized because of favism were studied for these abnormalities. GSH was abnormally low before, and markedly decreased after incubation of whole blood with APH. Glucose-6-phosphate dehydrogenase activity was deficient. Family studies indicate that this deficiency of glucose-6-phosphate dehydrogenase activity is genetically determined, and is probably transmitted by a sex-linked gene of intermediate dominance. (7954)

Notice: This material may be protected by copyright lew (Title 17 U.S. Code).

piration, systemic blood pressure, and intestinal motility. In the dose range 3 to 10 microgm. intraarterial veratridine causes a characteristic apnea in expiration. There is little or no change in systemic blood pressure, and heart rate is unaltered. The rhythmic contractions of the small intestine are decreased or abolished. This reflex pattern is also evoked by intraarterial injections of acetylcholine or nicotine but not by epinephrine or sodium cyanide. With larger doses of veratridine (20 to 40 microgm.) the apnea is followed by brief hyperpnea and a shift from costal to diaphragmatic breathing, which gradually reverts to the costal type after several minutes. A pressor response accompanies the early part of the respiratory response. These effects are duplicated qualitatively by intraarterial acetylcholine in larger doses (40 to 60 microgm.), or by traction on the mesentery. The afferent pathway for the respiratory, circulatory, and intestinal components of this reflex response is located in the splanchnic nerves. Vagal afferents do not form part of the reflex arc. The similarity of the reflex response to intraarterial veratridine and acetylcholine and traction on the mesentery suggests a common origin, possibly in mesenteric stretch receptors.

A comparison of the physiological frequencies of firing of the smallest medullated and of the non-medullated sensory fibers in mammalian peripheral nerve. J. M. Ritchie* and W. W. Douglas. Dept, of Pharmacology, Albert Einstein College of Medicine, New York 61, N. Y. A recently described technique (Douglas and Ritchie, J. Physiol., in press) has been used to determine the frequency of firing of the non-medullated and of the smallest medullated afferent nerve fibers. The non-medullated somatic sensor}” fibers of the cat’s saphenous nerve which are excited by touching the skin (Douglas and Ritchie, This Journal, abstract, 1958) discharged 2-6 impulses/sec. with light touch and up to a maximum of 10 impulses/sec. with heavier touch. The frequency of firing of the medullated delta fibers in the same nerve and to the same stimulus was about ten times greater. In other experiments on the rabbit when 5-

Veratridine response in the rabbit heart. J. S. Robb and P. N. Witt. Dept, of Pharmacology, State Univ. of New York, Upstate Medical Center, Syracuse. The characteristic veratridine effect on skeletal muscle with repetitive firing and prolonged double tension rise has been demonstrated (Witt and Swaine, This Journal, 120 : 63, 1957). It is well known that the drug also induces repetitive firing in nerve. Brooks el al. (Excitability of the Heart, Gruñe & Stratton, N. Y., 1955) have recorded spontaneous repetitive depolarizations in single cardiac muscle fibers after veratrine. For the present study direct electrodes placed on the excised perfused rabbit heart were suitably connected via an amplifier to an oscilloscope and the electric deflections-recorded with a Grass camera. Simultane^ ously tension was registered on a Sanborn ECG via a strain gauge and amplifier. The characteristic veratridine effects (veratridine 10~5) prolongation of systole, decreased relaxation and the secondary shoulder were present in the tension records. Simultaneous!}’, the electrical records showed repetitive discharges and slower repolarization. These Observations indicate points of similarity in the response of vera-trinized skeletal and cardiac muscle, especially confirming that cardiac muscle can be partially tetanized.    (7892)

Inhibition of analgesia by butamoxane derivatives. E. Brown Robbins and J. A. Miller, Jr. (introduced by F. G. Henderson). The Lilly Research Laboratories, Eli Lilly and Company, Indianapolis, Ind. Compounds in the butamoxane series did not prolong or potentiate the pain threshold-elevating action of analgesics; rather

, Notice: This material may be protected by copyright law (Title 17 U.8. Code).

ABSTRACTS OF PAPERS
The Journal of Pharmacology and Experimental Therapeutics

The Journal of Pharmacology and Experimental Therapeutics