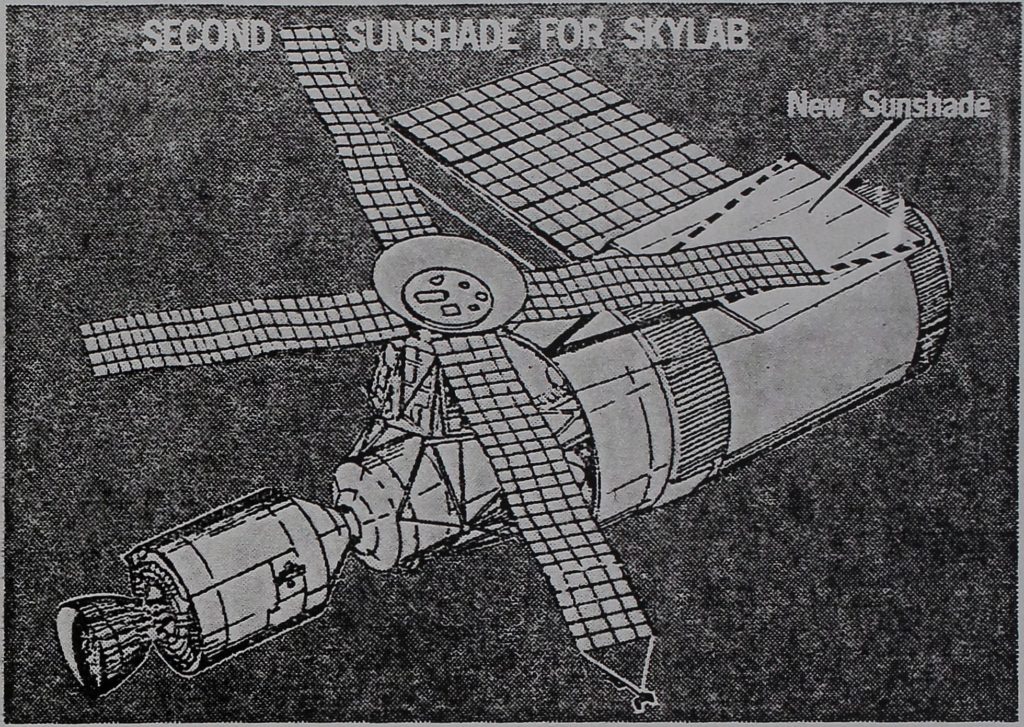 vimauts Set Record for Space ‘Walks’ –
m
•    Tne New Tone Times/aus. i, 1973
Two Skylab astronauts have -erected a new sunshade over the old parasol previously
deployed to protect the damaged craft from the sun’s rays. The new shield, attached
to a V-shaped boom, is made of aluminized Mylar that is designed to reflect sunlight.
mission, mw in its 10th day,
is scheduled to run 59 days,
ending with a splashdown in
the Picific on Sept. 25.
Although the leaking steer-
ing rocket caused project of-
ficials to order a rescue offi-
cials to order a rescue ship to
be prepared for a launching
next month from Cape Ken-
nedy, Fla., the astronauts have
been told to proceed with their
normal scientific and medical
experiments. The cause of .the1
rocket malfunctions has not
yet been determined.
Early this morning, the leak
in the primary cooling system
was discovered. It did not en-
but, if both the primary and
secondary systems should run
dry of refrigerant fluids, near-
ly all of the Skylab’s scientific
instruments would have to be
switched off.
Charles R. Lewis, a flight
director who was on duty
when the cooling system trou-
ble developed, remarked some-
what wearily, “I have the feel-
ing that someone doesn’t like
us at times.”
While the astronauts were
preparing for the spacewalk
this morning. Dr. Gariott
stopped to see how Arabella,
tire experimental spider, was
jloing. /•
“Our friend Arabella did
some good work last night,”
Dr. Gariott reported. “She’s got
rery unusual webs spun around
ill the four corners of live box,
vith some of the stringers from
orner to corner. So she had
😮 doo a lot of improvising,
>ut she did get her net out
it any rate.”
Dr. Story Musgrave, the cap-
sule communicator at Mission
Control, remarked:    ‘That’s
jreat news, Owen. And give
ler our congratulations.”
The astronauts will be pho-
ograhphing the spider’s web at
various stages of its construc-
;ion. It is part of a study to
ietermine what effect weight-
essness has on a spider’s web-
spinning abilities.