You are here: Home / Projects / Cheesemaking for Pleasure & ProfitCheesemakers’ Journal 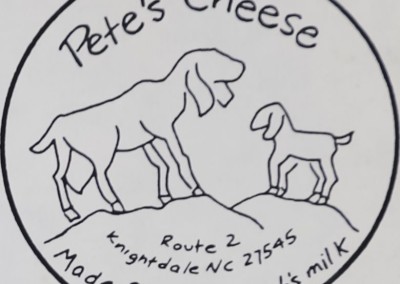 When I considered early retirement at age 62, I had no wish to just sit around. It seemed much more attractive to plan for a new occupation which was suited to my likes, age and circumstances. After having been a state employee for 35 years, it seemed interesting to become the master of my own time and career, i.e. to start a small business.

15 years earlier we had moved to a small farm on the outskirts of Raleigh, N.C. Not only were the living conditions for us more

to our liking than those in a suburban home, but luck would have it that it was even more affordable than houses with small gardens in the area. There were 17 acres of fields, two ponds and a stream, and about 15 acres of forest. This would be just enough to raise the feed and support a small herd of goats. I had had experience with breeding animals, had kept a few goats for the last 25 years. It was easy to

increase the size of the herd, spend time on growing most of their feed, and plan on using them for profit.

In order to produce food for human consumption, a license is required. When we explored the conditions for starting a goat dairy, it appeared that only a relatively large, machine-operated business would be profitable; this required a larger financial investment than I was ready to make. My wife had always made some fresh cheese in the kitchen. Now she suggested that we explore conditions for obtaining a cheese-maker’s license in North Carolina While I began to read books on cheesemaking, soil treatment, feeding, tried out recipes and, in contrast to earlier years, kept most of the newborn kids, first contact with the N.C. Department of Agriculture was established. A knowledgeable and friendly inspector from the Department visited the farm. He gave advice and outlined minimum requirements, such as testing of water and goats, building special rooms etc. Soon a sanitary milking chamber had replaced the accustomed single milking stand in the corner of the barn. A cheeseroom with washable walls and ceiling, covered lights, cement floor with drainage, and facilities for heating and cooling air and water was built by remodeling existing structures. 8 months after the start of retirement I had obtained my license and standardized the cheesemaking procedure. The financial investment was a little more than $3,000.

After one and one half years of having produced and sold my goat cheese, I find that all expectations have been surpassed. Only my own milk is used, assuring high quality from the health tested herd and good, fragrant feed, free from chemical residues. Every day begins with feeding and milking before breakfast. The raw milk is immediately filtered and cooled. After a leisurely breakfast with my family, I look after the welfare of the animals, clean the stables, work in the fields, turn ripening cheeses. About two times per week comes a cheese day: usually 6 gallons of fresh, cooled goats milk are used to make about 5 pounds of hard cheddar-like cheese, and the whey is made into ricottone for our own kitchen. The three months old cheese is sold and registered under the trade mark of “Pete’s White Cheese”. It has been aged for three months in a temperature controlled, converted refrigerator at 52° F. It is either sold directly to consumers who come to the house, at $3 per pound, or it is ordered by cooperatives, wholesalers and health food stores. The small quantity makes

it unnecessary to spend much time on marketing. Whoever shows interest gets a sample to taste. That is usually followed by an order. In this my second year I expect a net profit of about $1,500, but I plan for larger profits in the future, when the operation is improved on the basis of experience. Any increase in production would require a substantial higher investment in time and money. It is not planned to pursue such plans.

Everything connected with the new operation is enjoyable. The work in the fields on a small scale is good exercise and fills the extra time comfortably. Everybody who has kept goats knows the pleasure that daily contact with these animals provides.

The praise which satisfied cheese-buyers give is pleasing. I find the additional aspect of starting the first time a small business and leading it to success an additional reward.