You are here: Home / Projects / Growth Rate and Longevity in Two Species of Orb-weaving Spiders…Bulletin of the British Arachnological Society 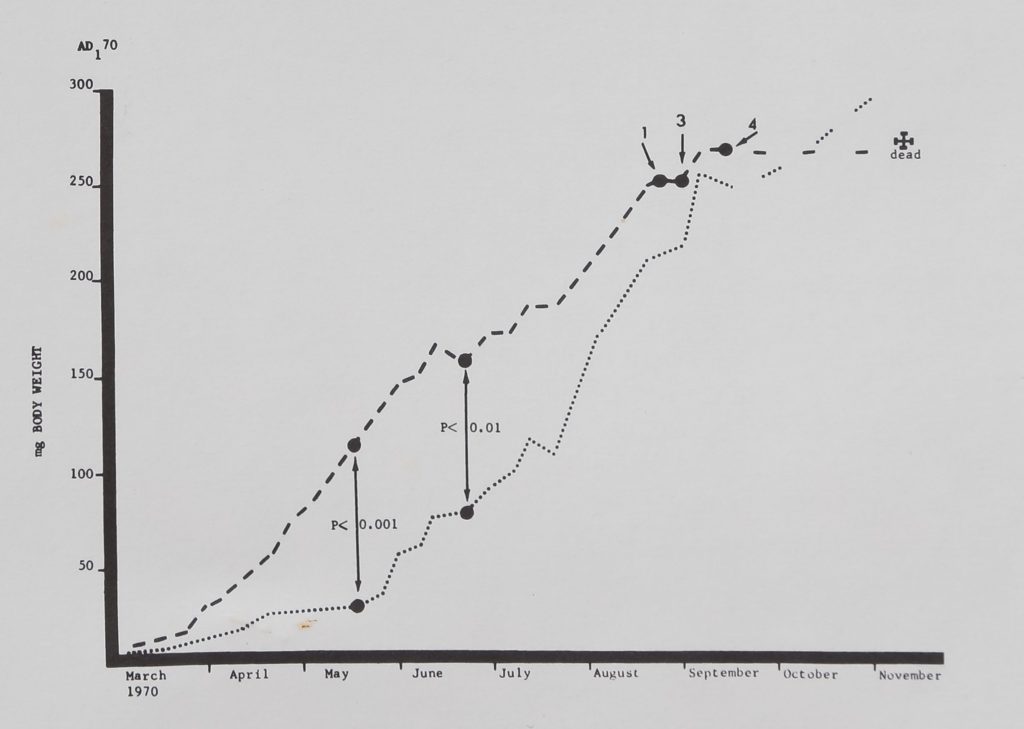 was compared with that of twelve females who had died at least four months earlier (Fig. 1).

Spiderlings from the same cocoons (Araneus diadematus Clerck and Argiope aurantia Lucas) show considerable variation in size during the first month of life, even under apparently optimal rearing conditions (Witt, 1971). Both species may have individuals surviving as long as fifteen months in the laboratory but, in general, deaths are distributed over several months following attainment of maximum size.

In a cocoon from each species, we found that animals with early growth-spurts died early, without apparent disease or accident in moulting. The last survivors of a M 7Ô cocoon were all slow growers. Since 300 animals from these cocoons had been removed for other experiments, it was necessary to record longevity from hatching to death in two undisturbed samples.

In the case of the cocoon of A. aurantia, two females died well before their littermates, and five survived several weeks beyond the life-span of the remainder of the litter. The mean growth-rates in the short-lived animals were 0.52, 2.04 and 1.51 mg/day for the second, third and fourth months respectively. Corresponding rates for the long-lived spiders were 0.11, 1.24 and 1.54 mg/day.

Cocoons in which hatching was already underway were brought into the laboratory and placed in rearing boxes. The largest spider-lings were placed in individual cages immediately; the remaining animals were caged as they left the communal web to build individual webs.

In the rearing boxes, water and a supply of gnats provided an ad lib diet; in the individual cages fruit flies were given daily until the spiders were large enough to accept a housefly every other day.

In the case of A. diadematus, the course of growth for six females who had outlived all their littermates

Fig. 1: Weekly mean body-weights for the six female Araneus diadematus living longest of all hatchlings from a single cocoon are connected by the dotted line, mean weights for twelve females dying earliest of all cocoon-mates are connected by a dashed line. T-tests were calculated at the points indicated by vertical arrows*, the means for the long-lived animals were significantly below those of the short-lived spiders in both cases. Numerals indicate number of short-lived animals dying during a week; all had died by 10 November. Long-lived animals survived at least to March of the following year.

and long-lived spiders were essentially equal. The small number of cases for A. aurantia require large differences in order to be significant, however.

Unless the laboratory imposes conditions significantly unrepresentative of population forces in the natural environment, it would appear that early rapid growth in the two species of orb-weavers occurs at the expense of endurance.

If this relationship is valid, its basis is nevertheless unclear. Portions of broods of insects have been reported to eclose at different times (Rupert, 1949 for example), producing morphologically distinct adults. Our animals appear to hatch at the same time and to be similar except for rate of development.

Poetsch (1963) has observed the hatching of cocoons at two different times for the same species of spider, presumably providing an advantageous distribution of egg-production over time. Our observations, however, apply to a single hatching, although differential maturing might provide similar advantage. In any case, death does not follow egg-laying closely in the long-lived animals.

At the moment, we cannot say which of the two extremes of longevity, if either, are remarkable, whether rapid growth has lethal consequences or slow growth aids in surviving developmental crises such as moulting. We have begun to assemble the records of the webs built by the spiders throughout life, in order to examine the possibility that the short-lived and long-lived animals can be distinguished on other grounds, for instance in thread-production and patterns of movement.

This work was supported by National Sciences Foundation Grant No. GB 6246.

Bulletin of the British Arachnological Society