You are here: Home / Projects / He Spins’ at NightGRAVURE MAGAZINE 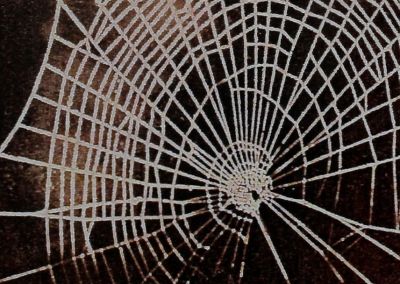 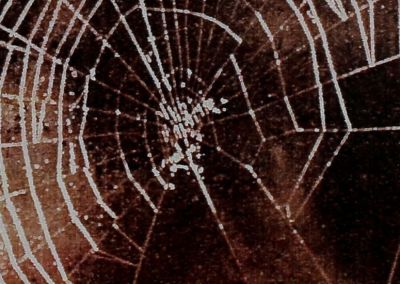 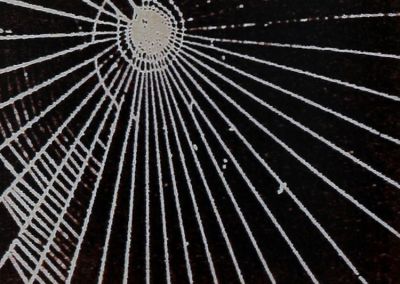 He Spins’ at Night —

“Will you walk into my parlor?” said the spider to the fly,

‘Tis the prettiest little parlor that ever you did spy-“

HE spins at night, the spider, and thus sets the trap for his next meal. He has no sight but compensates by a very acute sense of touch. The “signal strond” is his “lookout” and when an unwary fly sits.on the web, vibrations on this strand alert the spider who pounces on the morsel.

A group of then were trying to make an educational film for high sèhoof students that would show spiders spinning; their webs. All night they sat up waiting their opportunity. They fell asleep and when they awoke the spider’s work was done and there was no film.

In desperation they took their problem to Dr. Peter Witt, a relative newcomer to Syracuse from Switzerland. He-is now Assistant Professor of Pharmacology, State University of Medicine. Recently he was given the Buergi- Preis award, one given each year for outstanding work in pharmacology. His work on the effects of drugs on spider-web building won him this honor- ;1′

It all came about purely by Chance when he obligingly gave the photographers/some stimulants: for the Spiders in an effort to speed up their spinning processes.. Hé, himself, had a problemi’ How best .tèi1 portray, the effects. ■Pi-drugs?

With stimulants the„spiders acted as would a drunk—-they staggered wildly. Caffeine, allowed them to make a proper basic pattern except that the result was highly uneconomical. Large spaces were left through which any fly might easily escape.

When given LSD they mode even more perfect webs than- when /in ‘ a “normal” state.

Next day his friends were back. The spiders wove their webs all right, but the patterns were weird things—-nothing they wanted to photograph. Until this episode Dr. Witt had not thought of using spiders for obtaining clear-cut patterns. Warm-blooded animals are very complex creatures Compared with the spiders whose patterns are simpler and more clearly defined. ,

Now a new world opened for him.. He experimented with stimulants (benzedrine and caffeine), depressants (barbiturates) drugs that, would cause hallucinations in humans (marijuana and mescaline) and most interest- ingly, lysergic acid diethylamide (LSD).

There were difficulties. How to get the spider to take the drug? The dead fly would cause no vibrations.1 How would the spider know it was there?-* A medical student provided an ingenious /solution. The drug was mixed in a sugar solution which was then injected into a small fly. A tuning fork was used and the Vibrations set up in the signal thread were the clue to the bait. Apparently the mixture- was delicious because there was no further problem.about getting him to take the bait. *

They seemed unaware of outside influences and concentrated on the job. When a person becomes psychotic he has a very rich inner life and seems out of contact with reality. An interesting parallel

With depressants they “forgot” to finish what they had started and the result was a very ineffective food-gathering device. Humans react in much the same way.

Old-age patterns in the spider, are much like the process of growing old in humans. The pattern remoins the same but the results are uneven in texture and less effective.

Dr. Witt further suggested to Dr. Nicholas Bercel at the University of Southern California the illuminating studies of the effect of blood serum of schizophrenics on web-spinning. The most pronounced result was obtained by using the blood of catatonies (one form of schizophrenia). The spiders acted as do humans. They withdrew from all activity, there were only feeble attempts at spinning or none at all.

Dr. Witt is also inspired by the economy of the spider’s art. For instance, if all the threads came to a single point and a large fly banged through it the whole web would give owov with the work to be done all over again. This does not occur. No three stands come to a single • point and an over-all strength is added. A real Construction Engineer!

Drugs or no drugs—spiders still spin their webs at night. ‘ No one has been able to alter thatroutine.

He Spins’ at Night
GRAVURE MAGAZINE