You are here: Home / Projects / LASER LESIONS AND SPIDER WEB CONSTRUCTIONReprinted from Nature 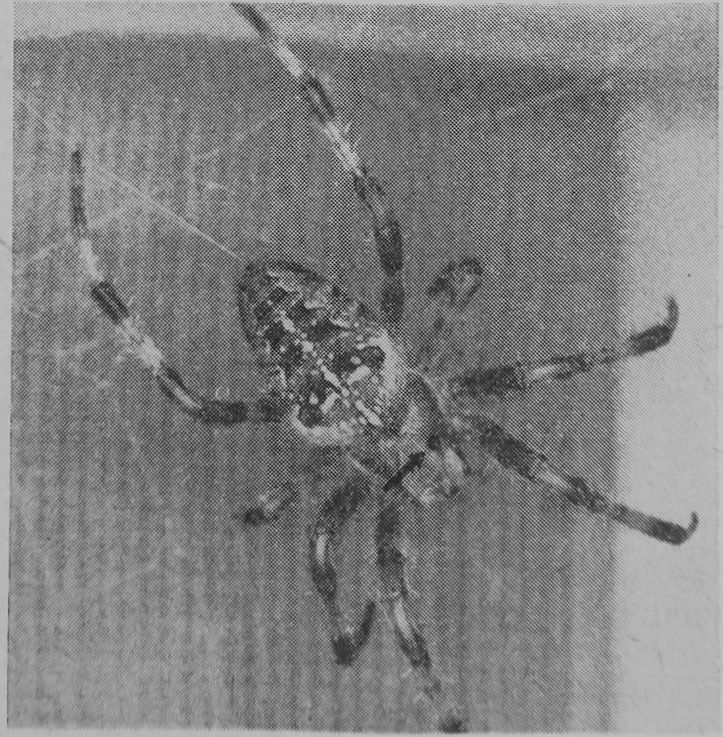 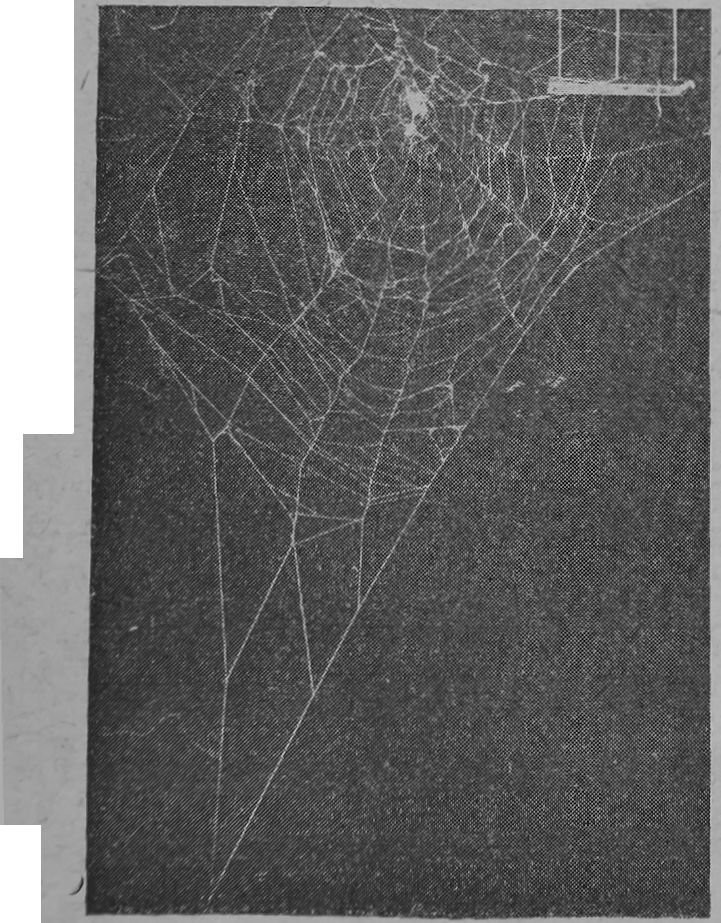 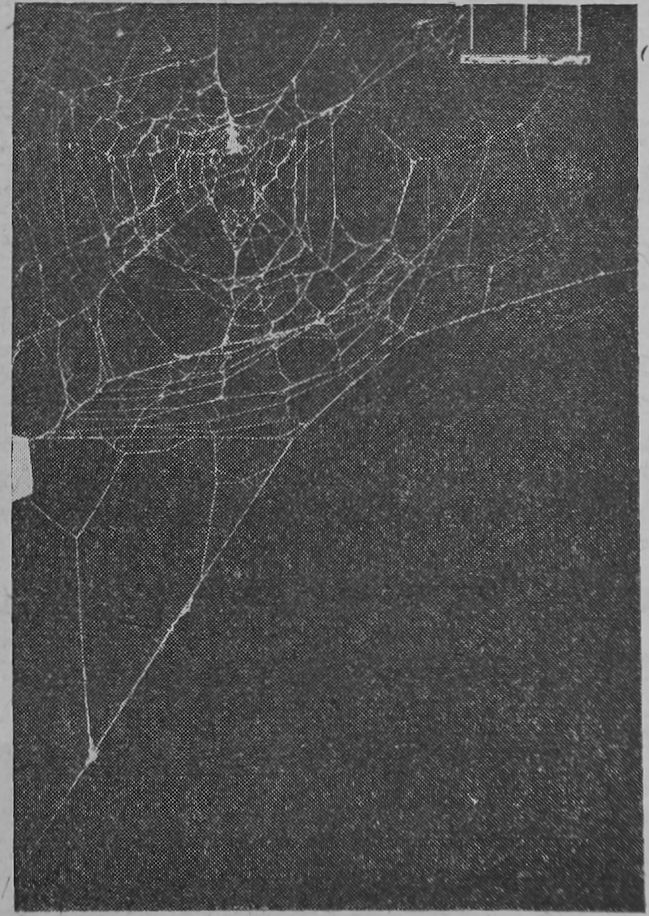 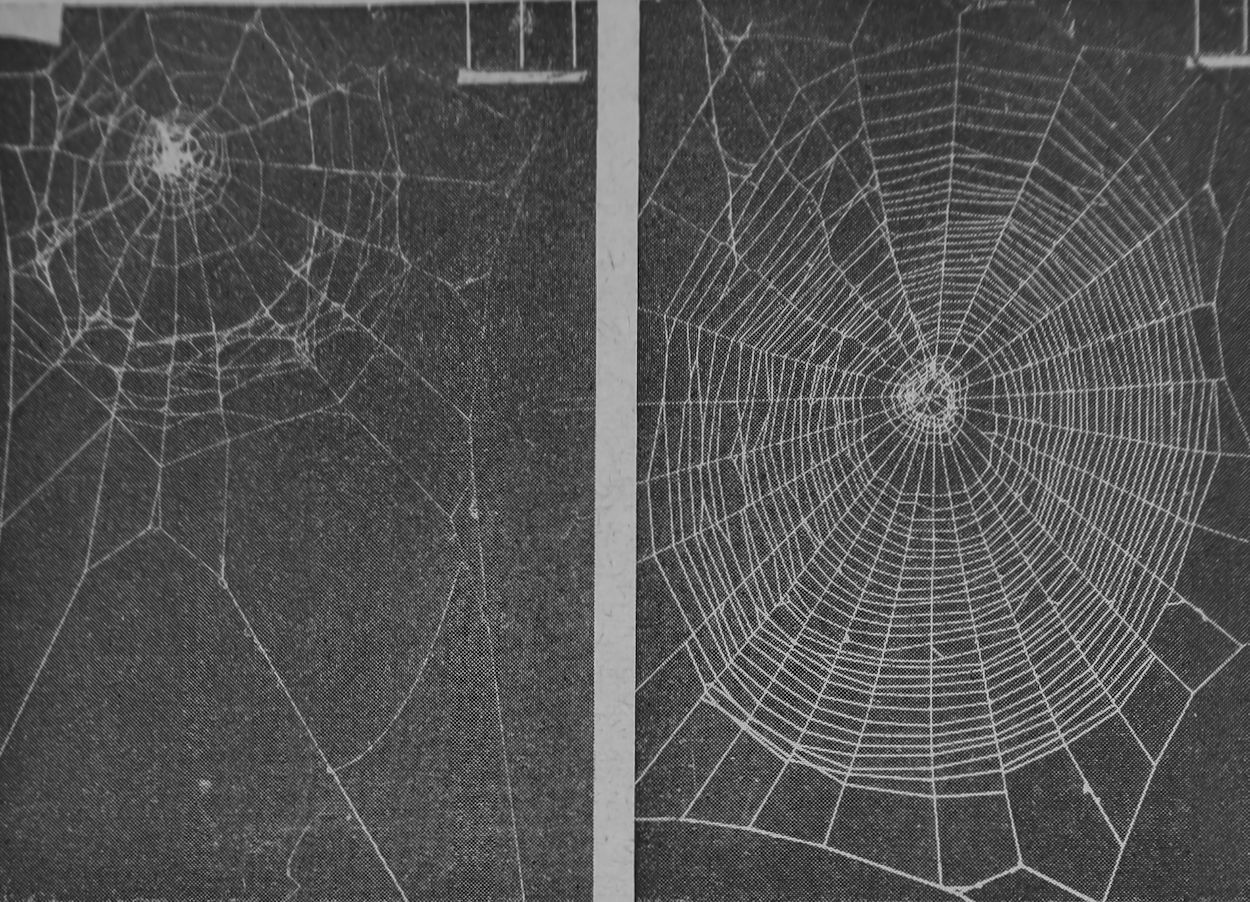 APART from its intrinsic biological interest, the web-l building of spiders provides a useful test of the activity of pharmacological agents1. Particular substances affect web-building in particular ways2.

Knowledge of spider histology, let alone the relationship of body structure- to behavioural function, is scanty3’4. A means óf objective analysis and correlation would advance knowledge of the spider, but also increase the utility of the web test. The site of the drug action ultimately might be specified because of its consequences in particular aspects of web construction.

Unfortunately, the traditional procedure of producing ■discrete lesions in the central nervous system to observe behavioural consequences is particularly difficult in most arthropods because of the small size and rigid cuticle of

Fig. 1. Enlarged dorsal view of Araneus diadematut Cl., the blaok arrow pointing to the entranoe of the laser beam into tho body on the cepholothorax. The original length of the animal’s body was about 6 nun

the animals. A out in the exoskeleton permits outflow of body fluids and consequent fatal fall in body pressure.

In the experiments reported here, the intense and direotional radiation of a laser beam was used to produce lesions in spiders. The examination of web-building before and after the exposure, together with subsequent histological analysis, promises a means for the functional mapping of the central nervous system of spiders. This article deals with preliminary results of the procedure.

Altogether 20 adult female spiders of the species Araneus diadematus Cl. were exposed once to the beam of a laser. The target in 4 of this number was the abdomen rather than the cephalothorax, in order to assess the effect of lesion production in a region of the body not containing central nervous system. Thirteen control spiders were handled and treated the same way except that the laser flash was left out. The web-building was measured from photographs of sprayed webs. The spiders renewed these webs daily in a 20^30-min period at a time determined by a controlled light and temperature source in the laboratory. The method of keeping spiders singly in cages, photographing and measuring their webs, and the variation in ‘normal’ web pattern have been discussed earlier2“5. All spiders used in this investigation had been in the laboratory for at least 4 weeks; some had been raised and their webs had been observed from the time of hatching. After exposure to the laser beam the animals were either observed until they died or were killed for histological preparation. The follow-up time varied between one day and 6″5 months with a mean of 65 days.

A pulsed ruby laser operating at a wave-length of 6943 A was used to produce lesions in spiders. The laser provides a well-collimated light beam with an energy of about 1 joule. The beam is focused by means of a 32-mm Bausch and Lomb microscope objective on to the back of the spider. The focus can be adjusted and located visually on any place of the spider’s body by means of a collimated monitoring light beam passing through the ruby laser crystal. The procedure used, for the present experiments results in the formation of a light spot with a diameter somewhat less than lOOp, with an available power density of 107 W/cm2 for a 1-msec, laser pulse; it is possible to produce a focus down to lg. Passage of the beam through the tissue produces cauterization. The animal is held in position on a watch glass through the pressure of a piece of wide-meshed gauze. A micromanipulator permits movement of the holder relative to the laser beam.

Each spider is photographed so that the entrance of the beam can be located on the body surface (Fig. 1). For histological sectioning the cephalothorax or abdomen is fixed in alcohol-acetic acid and embedded in paraffin and bees-wax. Serial seotions 6[x thitík aro stained with

Fig. 2. Cross-section of cephalothorax of a spider which built webs with permanent multiple disturbances. The black arrows point to the large unilateral lesion in the central nervous system. The spider was killed 43 days after exposure

haematoxylin and eosin and inspected under the microscope. There is, to our knowledge, no decent description of the anatomy and histology of Araneus diadematus Cl. and its variations. This presents some difficulty in establishing the location particularly of older lesions. The shape and location of the central nervous system as observed in our sections were—as can be expected—not always in agreement with the anatomy of ‘the spider’ as described by Savory3 and Comstock4. We have therefore started to map the body of several individuals of Araneus diadematus, but the results are not yet available. An example of a large central nervous system lesion is shown in Fig. 2.

All 13 control spiders survived and built webs. Inspection and measurements of photographs j revealed no abnormalities in the webs. Five of the treated spiders died within a week after exposure, one having suffered fluid leakage, the others lesions in the oesophagus and heart. This result indicates that the laser beam coagulates the spider tissue in such a way that leakage of body fluid is rare. Only one of these 5 spiders managed to build a single web before death. Two with cephalothorax lesions survived for 9 and 63 days, each producing only one apparently normal web- Examination of photographs of 191 webs of surviving spiders revealed alterations warranting statistical analysis to compare them with pre-radiation webs.

Four parameters of the webs seem important to consider and are readily quantified:

Two measures denote the structure regularity of the web. The normal web of Araneus diadematus consists

Fig. 3. Temporary multiple change of web measurements in spider with lesion outside the central nervous system. (One interval between white, vertical lines at right upper

b.    Ten days later web measurements are not different from control values; web-building

Fig. 4. Permanent multiple change of web measurements in spider with lesion in the central nervous system (compare with Fig. 8) a, Web built six days after laser exposure shows irregular angles and spiral in smaller web built with a shorter thread; b, 88 days later the same spider still built a web with

of a spiral with intervals decreasing regularly from the periphery to the centre, covering sectors of approximately equal angles. However, the angles of the segments of the upper half are larger than those of the lower half, and one or two sectors with markedly larger angles are normal in a web. The regularity of the webs was expressed as the distribution of differences between adjacent sectors (in degrees) and as the distribution of differences between adjacent turns of the spiral (to an accuracy of 0-5-mm).

In normal webs the distribution of differences is skewed with a larger number of small differences between adjacent sectors and spiral-turns. The xa test was used to compare the combined pre- and post-laser distributions in those measures for individual spiders. Testing of a single web against controls, as in the case of the first web made after laser exposure, required grouping of the measures into four-fold tables. Table 1 lists the fate of the radiated spiders and the results of the statistical analyses of their webs. All changes listed were significant at the 0-01 level or beyond.

Thus, laser radiation pr’oduced several behavioural consoquences in the surviving spiders in the first month after exposure. Two spiders showed unaltered web- -building behaviour. Here the lesion probably was restricted to an area of the body having nothing to do with regulation or execution of movements. .

Transient behavioural abnormalities occurred in 4 of the expdsed spiders, apparently a consequence of damage to tissue with recovery capacities. Permanent disturbance occurred only after lesions in the cephalothorax of spiders, as the presumed consequence of damage to tissue incapable of regeneration, such as nerve tissue. Histological analysis appears to confirm central nervous system lesions. Examples of these several consequences are illustrated in Figs. 3 and 4.

It is to be noted further that the webs may be disturbed in distinctive ways. Apparently the web is the record of the operation of a number of discrete functions of the central nervous system of the spider. Particular disturbances of the architecture of the web are symptoms of defocts involved in particular functions. For example, different pattorns of movement are required in spiral os

Whilo our technique is relatively simple and oxact (a laser is no longer a rare and very expensive instrument, the 1-msec exposure time permits work with unanaesthetized animals, the wound is immediately closed by coagulation, and the beam can be focused as narrow as lp.), the results expressed as survival rate and change in behaviour seem to compare favourably with those obtained by Vowles*’7 and Huber8.

We conclude that analysis of the structure of the web permits an objective measure of behavioural consequences of lesions. Coupled with the ability of the laser to produce small and non-fatal lesions in the ‘body and particularly in the central nervous system of the spider, a means seems to be at hand for objectively relating spider (and other arthropod) behaviour to the results of histological analysis.

This work was supported in part by grant PR 2097 from the U.S. Public Health Service.