You are here: Home / Projects / Life on a ThreadFilmakers Newsletter

Watch the Movie – Life on a Thread

An introduction into the study of behavior, using the example of the web-building spider.

A 20-minute, colored, 16 mm sound film on the building of the geometric orb web and prey catching of the spider Araneus diadematus Cl. (Araneae, Araneidae).

More about Life on a Thread 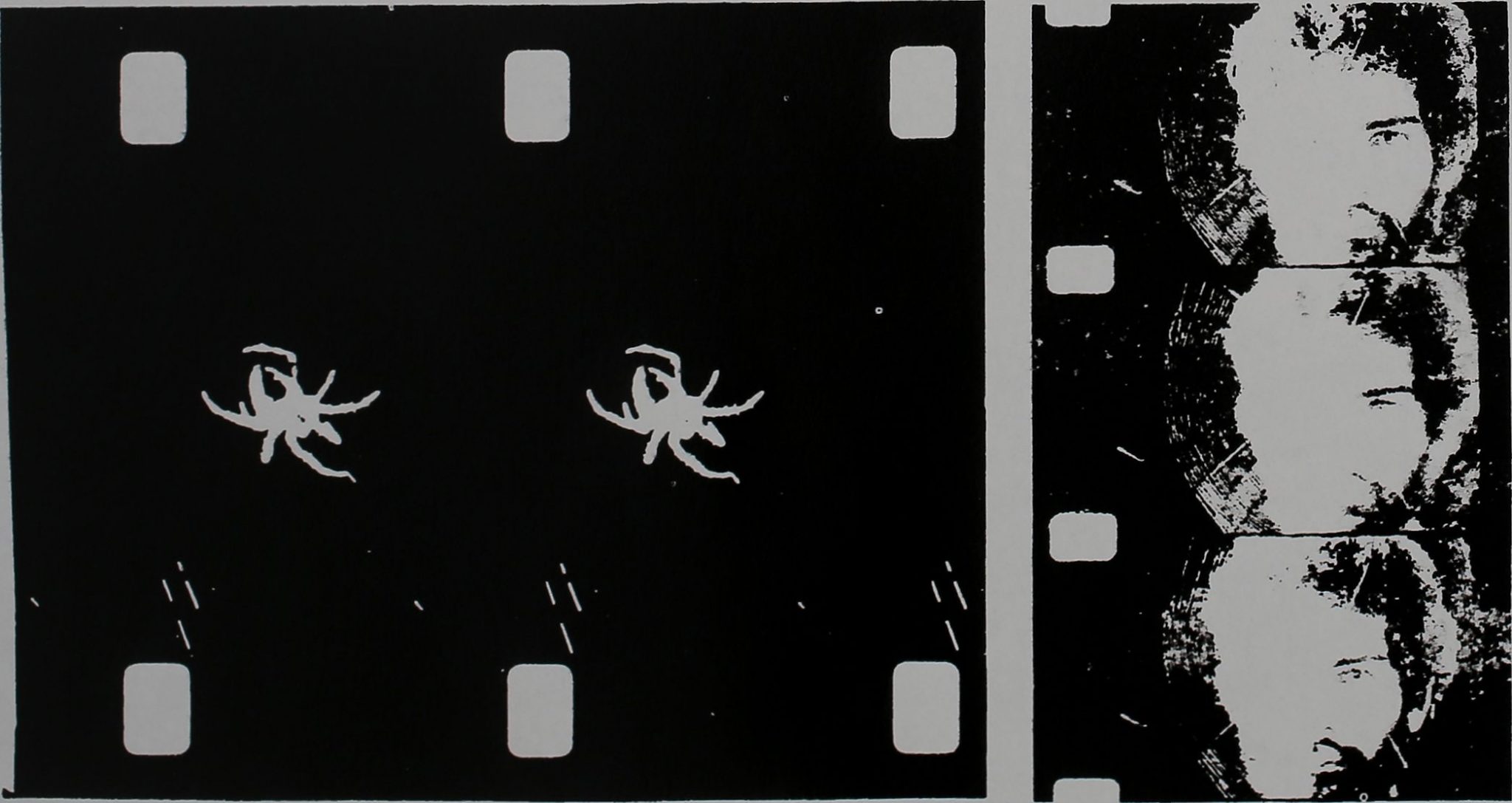 Three years ago I was working for a film-product ion house in Philadelphia producing and directing educational films on drug abuse for distribution by Encyclopedia Britannica. SCAG, a film on heroin, had already been completed and work on the second, UP-DOWNS, a film on amphetamine and barbituates. was underway. The latter was something of a compendium on the subject: the sponsors wanted a wide variety—everything from an animated history of the drug discovery to photographs of Marilyn Monroe and other notables who had overdosed on barbiturates. While researching the topic, 1 had read of Dr. Peter Witt’s drug experiments at the Department of Mental Health, Raleigh, North Carolina. Various drugs, amphetamine among them, were administered to spiders and their effects observed from changes in web-building behavior and construction. The image of

spaced-out spider webs excited me—and what was one more unrelated fact among the rest?

I called Dr. Witt immediately and soon an Arri-S, several quartz iodine Colortran lamps, a heavy-duty tripod, and I were on our way to Raleigh.

I guess when I came along with camera and trappings I rekindled Dr. Witt’s old memories of how he first became involved in the study of spiders and webbuilding. In the early 50 ’s, he was working as a pharmacologist at the University of Tubingen. A German team filming spiders wanted a drug or something to make them build their webs at an hour more convenient to the crew (spiders build in the early morning hours and the serious observer is obliged to stay up all night) and tapped Dr. Witt for the job. Amphetamine, known today as “speed.” was the drug of choice. Unfortunately for the film team, web-building occurred at the same hour; it was the web itself which was altered (see pictures). This initial experience led Dr. Witt to further experiment with spiders and finally to a fulltime study of normal as well as abnormal web-building. Since then, this study has occupied most of Dr. Witt’s time and has resulted in a number of books and articles.

Film and still photographs make excellent records of web-building behavior and are particularly useful for detailed study and comparisons. Dr. Witt has even designed a special light box for photographing the delicate, elusive webs (otherwise quite invisible unless bejeweled by morning dew). But the film I was making could include only a bare minute of the elaborate process, and that minute was also to show normal and drug-defective webs and cover the usual lead-in, lead-

ptit it out of focus.

In summary, if we had it to p? over, a cooler light source would replace the quartz Colortran lights and an additional, directed light on the spider would be used to balance the exposure readings.

As reported Mbove, patience is a requirement in filming spiders (as it is for most behavior studies). It was a matter of setting up in the afternoon and simply waiting for the creatures to begin their webs. Our spiders were of a species which typically builds webs in the early morning. We found, however, that this could be as early as If) in the evening or as late as 4:3’¿?S in the morning, perhaps a function of each spider’s peculiar circadian rhythm. ‘‘Setting up” meant, then setting out 8 to 12 frames-cum- spider and setting lights and camera on a movable tripod. Then we would wait, Dr. Witt and I each taking turns through the night watching each spider for the first movement signalling she was ready co begin her web. When the signal came, :he lights went on and the camera began co roll. Sometimes the spider would retire co the side of the frame. The lights and camera would go off, and we would retire to the side of the room to wait some more. Spiders have a lot of patience—they seemed able to wait forever. They can go without food for up to two months, so one doesn’t plan on winning a wait-out with them. But the odds were good that at least one of the 8 to 12 spiders would come through on a given night and we were set up to move to whomever cooperated.

The film in its finished form is comprised of footage of several spiders. This was due partially to their temperamental nature described above and to the filming techniques we wanted to use. Some footage was speeded up to show behavior as repeated patterns, other footage was slowed down to show movements in detail. A web takes 20 to 40 minutes to build. Each spider builds one web each day, then takes it down, eats it and resorbs the material at the end of her working day.

The Arri-S was the primary camera used during most of the production of LIFE ON A THREAD; a Bolex Rex 5 was used for some of the outdoor shooting, and a hi-speed Bell and Howell camera for the slow-motion material. An interval- ometer used with the Arri-S enabled us to do time lapse shooting, and two 650 colortran quartz iodine lights were used for lighting webs in the lab. Fixed focal length lenses were used most of the time, my favorites being the 5<)mm Switar micro lens for the Bolex and a 90mm micro Elmar lens on the Arri-S. From time to time a 12-120 Angenieux zoom

fitted with a plus one or plus two diapterf was also used. Film stock was EFB 72421 and some EC0*725 5 for the outside’ material.

By the time shooting was finished, twot years had elapsed since my first meeting? with Dr. Witt and plans for our project* continued to move ahead. I was now! working for Timothy Asch at the Center! for Documentary Anthropology ini Somerville, Massachusetts. Fellbwi workers there were encouraging and had« many suggestions. In the end, though, the* greatest assistance came not from out-* right words, but from observing the styles of editing and the philosophy of the^ Center itself. I had learned there to cut aV scene so as to let behavior unfold* naturally, so that the overall patterns! became visible. The films made at the! Center allow «the vjfviewer to be observer and provide him with visual! information from which to interpret! behavior as well as to make further! judgments. No music or other super-I imposition should distract from the visual I experience.

One scene from LIFE ON A THREAD] runs over 2-Vi minutes, uninterrupted byj a cut. Patterns of web-building emerge asl wholes. Narration has been kept to a| minimum, and white-on-black titles make I certain general points about behavior« which are elaborated on in the study! guide which accompanies the film. The! film is meant to create discussion and| encourage people to think and to ques-f tion as well as seek answers. In a word,! the film is meant to be edifying.

Most films that come our way merely I wash over us and are a passive experience.! LIFE ON A THREAD has been madel with the intent of engaging the viewer. It* is intended primarily for classroom use,! where a teacher prepared with informa-1 tion from the study guide can pursue! meaningful discussion about the nature off web-building in particular and behavior! patterns in general.

This was my first experience filming^ an animal species on intimate terms and Ii learned some things the hard way. First,| one must really have all equipment on I hand, tested, and ready for use. Nature! ordinarily ignores the photographer’s plea; to “wait a minute” while he gets a special } lens out or changes film. Another lesson ■ is the necessity to find some compromise ^ between the equipment and technical requirements of filmmaking and the inter-j ference they impose upon the natural] scene. And finally, one must have’ patience.

LAL’REXCE SAI.ZMAXXis an independent filmmaker and photographer. His pre- ■ vio us credits include “Scag” and “Up- j Dozens ” as well as “Eddie ‘ and “Alfred. ” two films made with Peter Barron on an ¡ A FI Independent film makers grant about the lives of two men in a single-room occupancy hotel in Xew York City.

Life on a Thread
Filmakers Newsletter