You are here: Home / Projects / New Hope For Mentally Ill 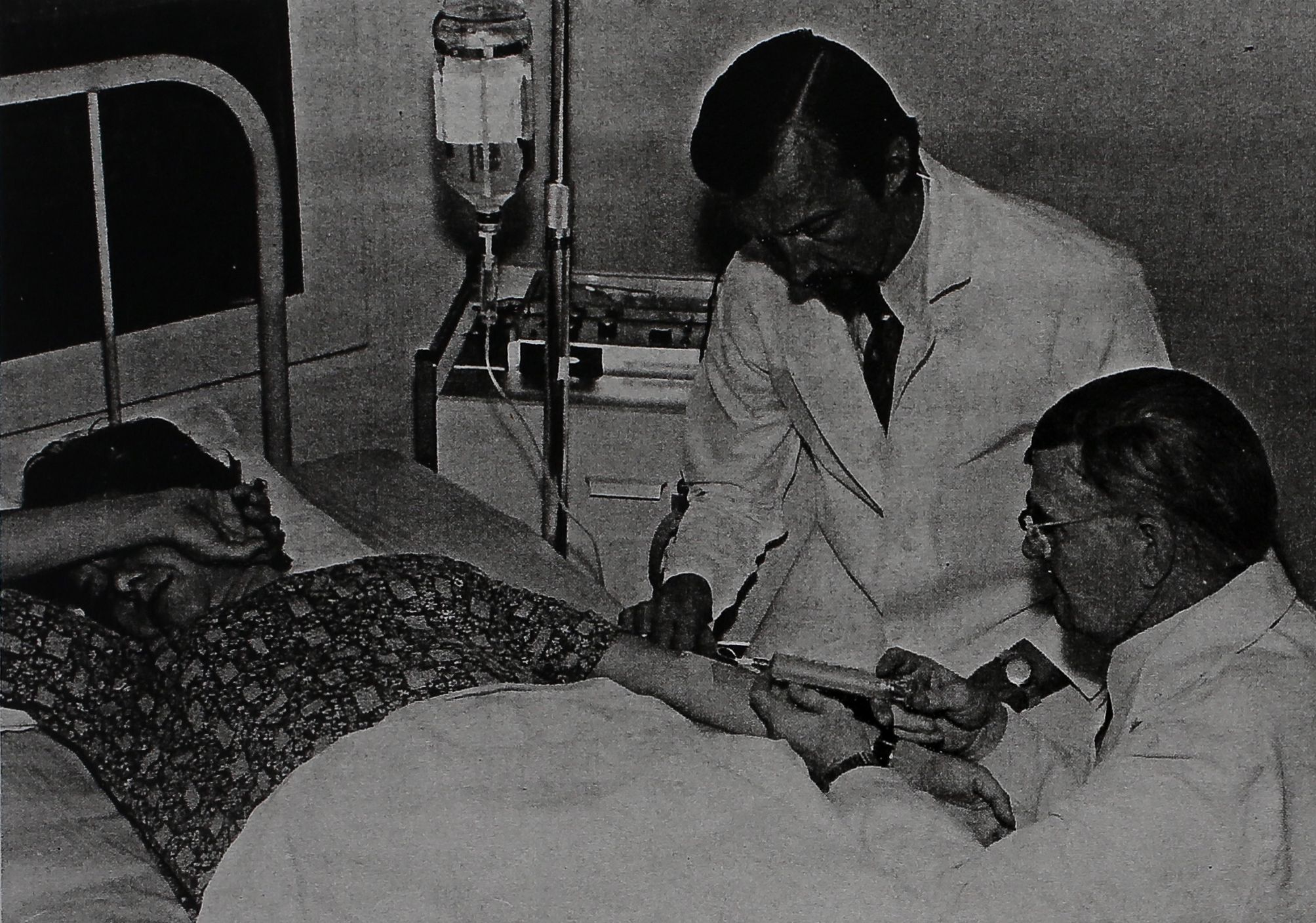 IIIMHopBISMentaM 111
by Clay Williams
Efforts on the part of two re-
search scientists at Dorothea Dix
Hospital in Raleigh have given
hope to people suffering from the
most common of all mental ill-
nesses—schizophrenia.
Can schizophrenic patients be
brought back from their psychotic
dream world for a period sufficient
to initiate rehabilitation proce-
dures? The answer has eluded re-
searchers working with the mental
disorder—until now.
Drs. Ian Wilson and Arthur J.
Prange gained world-wide atten-
tion when they successfully treat-
ed patients suffering from severe
anxiety and mental depression
with Thyrotropin Releasing Hor-
mone (TRH).
Favorable results caused the
two scientists to direct their ef-
forts toward schizophrenia—a
progressive mental disease that
accounts for one-third of all ad-
missions to mental hospitals and
about half of the long-term pa-
tients, according to Dr. Wilson.
Drs. Wilson and Prange first ad-
ministered TRH in the treatment
of anxiety and depression in 1970
and have used it periodically since
in clinical tests.
“Depression is characterized by
showed that adult schizophrenia is
often associated with impaired
functioning of the thyroid gland
in infancy; and many of the symp-
toms of depression which respond
best to TRH are also found in
schizophrenia.:
After 10 days at Dorothea Dix
the young woman was given an
injection of TRH. Dr. Wilson said
results were fantastic—more ex-
ceptional and dramatic in schizo-
phrenia than in depression.
“Almost; immediately a re-
sponse was noted. Her frozen ex-
pression dissolved and she start-
ed to talk in a lucid and logical
manner. Her conversation indicat-
ed she knew how abnormal her
behavior had been, and was aware
of hallucinations, but was no long-
er disturbed by tte fact that she
p^Sberienced them.
Bllire^day wore on and the
patient’s mood rose to a normal
level she gave her interpretation
of the way her illness started.
Whether or not it happened as she
described it is questionable. But,
l|;did show that she new had in-
sight, where before she did not
even know she was sick,” Dr.
Wilson said.
Dr. Wilson reported that the
dramatic improvement lasted for
a period of about five days, after
which, she gradually slipped back
into her previous state.
“It is difficult to- describe the
pronounced change in the schizo-
phrenic personality upon admini-
stration of TRH. It eclipses any-
thing I’ve seen in 20 years at
practice. In order to appreciate
the revelation it would be neces-
sary to have a technical under-
standing of this insidious dis-
ease,” Dr. Wilson said.
The researchers consider the
breakthrough vital in the treat-
ment of schizophrenia because
tranquilizers, the basic treatment
for the past 20 years, only modi-
fies symptoms. TRH, on the other
hand, brings about a fundamental
normalizing change in personality.
And, since TRH is a natural sub-
stance it is unlikely to cause toxic-
ity to the body system over a
period of time.
Although TRH at present gives
only temporary relief from schizo-
phrenia, Dr. Wilson said future
studies probably will be directed
toward giving a series of doses
hopefully to alter the pathologic
personality for a period of time to
allow rehabilitative procedures to
be started..
The researchers appear to be
aiming ultimately for a way to give
the schizophrenic personality a
higher level of functioning.
“Without doubt,” Dr. Wilson
said, “schizophrenia is respon-
sible for a major share of human
misery and suffering both to the
patients and their relatives. It is
also of great socio-economic im-
portance in the loss of productivity
from individuals who require con-
stant institutionalization once the
illness progresses.”
7
Doctors at Dorothea Dix Hospital in Raleigh have achieved a worldwide first in successfully treating severe mental depression
I with a.thyrotropin releasing hormone (TRH), a drug used mostly heretofore in diagnosing pituitary-thyroid disease. Drs. Ian Wil-
son and Arthur Prange first administered the drug in’j970|and have used it’ periodically since in clinical tests on volunteer
patients. Hesitant to label their findings a breakthrough in the treatment of severe mental depression, they do admit, however,
that the drug’s quick anti-depressant action warrants further^ investigation.
influence the seqjtftisoh:Öl hor-
mones from the thyroid gland, Dr.
Wilson explained.
■-‘previously we were Interested
Ira the function of thyroid hor-
Imones in the treatment of depres-
sion. We had known that the ad-
»»small quantities of thy-
Irqiq. hormone to a standard anti-
Idepressant greatly accelerated its
■antidepressant effect. It was sup-
Iposed that TRH would have a
■similar effect,” Dr. Wilson said.
KfHowever, onj^mcaf: trial at
Ißix, yy© fjjscovered; that TRH itself
lhad remarkable antidepressant
in’ r after
ladministration of the hormone the
Ipatient appeared in a peaceful and
llp^dif state. Later in the day,
Kherp was a remarkable elevation
■in ^möra§’ he said. But, did the
■three scientists dare hope that
ItRH would release a person, if
■only temporarily, from the
Ishadowy world of schizophrenia?
At the time of her admission to
■Dorothea Dix the confused teen-
Eager had grown into a young wom-
an in her mid-twenties.’ Now,
■she was totally withdrawn from
■ reality—constantly expressing de-
Elusions of persecution and experi-
Eancing auditory hallucinations
■ (hearing voices). The voices were
■ always threatening and menacing,
“according to Dr. Wilson.
n Dr. Wilson said the decision to
l-evaluate the effect of TRH in the
>r treatment of schizophrenia was
‘made because investigations