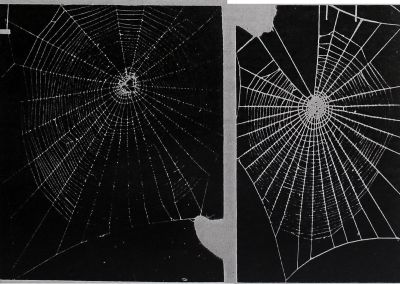 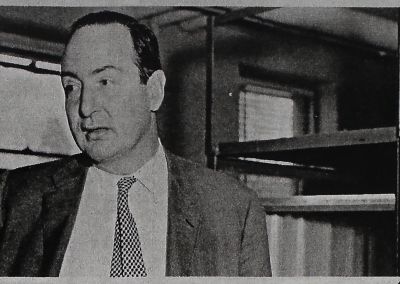 Ask him a question about spiders, and he knows them so intimately that he can provide the answer.

He. is the tall, 48-year-old director of research for the North Carolina Department of Mental Health.

The Leader talked with him in his office in the research builds lng on the grounds of Dorothea Dix in Raleigh.

Several labs in the building are devoted to study and research on spiders — more than 500 of them are now either spinning or about to spin webs.

And Dr. Witt, a pharmacologist, has devoted years – at least 17 — to the web-building behavior of the spider in relation to the effect of drugs upon its habits.

A man of international renown in his field, he came to Raleigh from Syracuse, N.Y.V University about seven or eight months ago.

He is a native of Berlin and was schooled In Germany, Austria and Switzerland.

Elise and Mary share their father’s interest in spiders. *When they find one, they become very excited,* said the scientist. *It proves that it is a matter of education.*

As for North Carolina countryside, Dr. Witt described it as “spider paradise.*

His interest is not confined to spiders alone. He has a personal interest in milk goats and has five on his Knightdale farm.

However, his professional passion is for spiders.

His office is filled with photos of spider webs. One geometric web was exceptionately striking. By its side, is another web spun by the same spider, after he had been fed an amphetamime. Then the web was erratic, half done, and then apparently the spider quit altogether,

Dr. Witt has been experiment* ing with drugs and spiders for a long time, but his interest, and delight in his work is razor sharp.

A photo of a geometric web is a thing of beauty, • and Dr. . Witt said that he has never ceased to be amazed at the variety and/ exquisteness of spider webs.

A wide range of drugs affecting human behavoir have been tried on spiders and with surprising results.

For instance, a spider Who has been fed LSD will spin an almost perfect web,.

• *The threads are more re* gularly spaced,* Dr. Witt said.

The spider labs are In the basement of the old Depart* ment of Mental Health on Dorothea Dix Hospital grounds.

The rooms are cramped and are served by a single water faucet,

More fünds had been asked to improve the quarters, but no such recommendation was made in v. Governor ^ D an Moore’s recommendation to the General Assembly, •Catastrophic,* said DrV Witt about the situation Over a telephone to a colleague, f Büt we shall d6 the best we can. :

The drug makes the spider less sensitive to stimuli from the outside and the spider can finish his web with an economy of’ movement.

As a matter of fact, Dr. Witt said that at present more is known about the spider, than any other animal,’ * v ■ •

By the web, it is possible to know the spider’s age, body size, a great deal about its central nervous system and if there are any motor disturbances.

4 At a recent speech at .NCSU, Dr. Witt saidi *We know more about the motor behavior Of spiders than we do about the be* havior of humans.*

While Dr. Witt has this thing going for spiders, as an M.D., he is also investigating motor behavior problems as they may apply to humans.

At the. Mental Health Research building, the spider labs are controlled through temperature and

light to fit the spider’s comforts

The spider spins roughly 20 to 30 minutes before dawn constructing its web with incredible speed. Dr;-t; Witt said the weft ;

serves as an efficient trap for food, as a sense organ and as complete living and mating quarters.

Currently, spiders are being used in the field of memory research. –

•Mice are rather stupid, but a spider can move around his web,* he said*

For instance, v % has already found that a long term memory takes a long time to consolidate.

– Memory and orientation of the spider are now under scrutiny.

; For instance,: if the web is turned, ^around and the spider placed on it, he may not only be disoriented, but his memory completely shot.

A few years ago Life magazine carried a stunning series of spi- x der web pictures, and one of Dr. Witt who was doing drug expert* / mentation on spiders in Switzerland.

For instance, if a spider were given caffeine the web would be ragged, with the spider laying threads in all directions instead of concentrically.

The spider who had chloral hydrate would leave an unfinished r web in an erratic pattern as he ^’Crawled off to sleep.

Down in the laboratory Dr. Witt has glass frames for the spider webbs. They are sprayed and photographed against a dark background.

•Every day T see webbs more beautiful than the others,* he vexclaimed. “Beauty is a matter : of symmetry and balance…beau*

ty in a spider web is a matter of economy.*

Two years ago Dr. Witt wrote a fascinating paper for “perspectives iii Biology and Medicine.* It is titled, “Do we live in the best of all worlds? Spider webs suggest an answer.* At the beginning, Dr. Witt quotes from Voltaire* “Candide*: “It has been proven, he said, that things cannot be any different, because, as everything has been created for a purpose, it necessarily happened for the’ best purpose.

“Notice that noses were created for wearing glasses, and consequently we have glasses. Legs are obviously made for wearing boots, and we have boots!

“From all this follows that those who have stated that all is good said something foolish: they should have said that all is best.*

And in his conclusion in the paper, Dr. Witt wrote:

“We can proceed to increase our understanding of the working of the animal’s central nervous system; we can apply computer simulation to the investigation of spider web building.

•When we develop a program for the machine which contains all the means of ’planning’ and orientation, economy and experience in mathematical formulations and compare it to the spider web, we may discover the simulated animhl is still far from able to build the web we know.

•I guess there are still many unknowns in the beautiful pattern of* the geometric orb web with delights the eye on a. summer morning and provides much stimulation for thought.*

Dr. Witt described his paper as “rather philosophical* —but wouldn’t you expect philosophy from a scientist who specializes in spiders, raises milk goats, loves to garden and plays the cello for his own amusement?February 22, 1967.