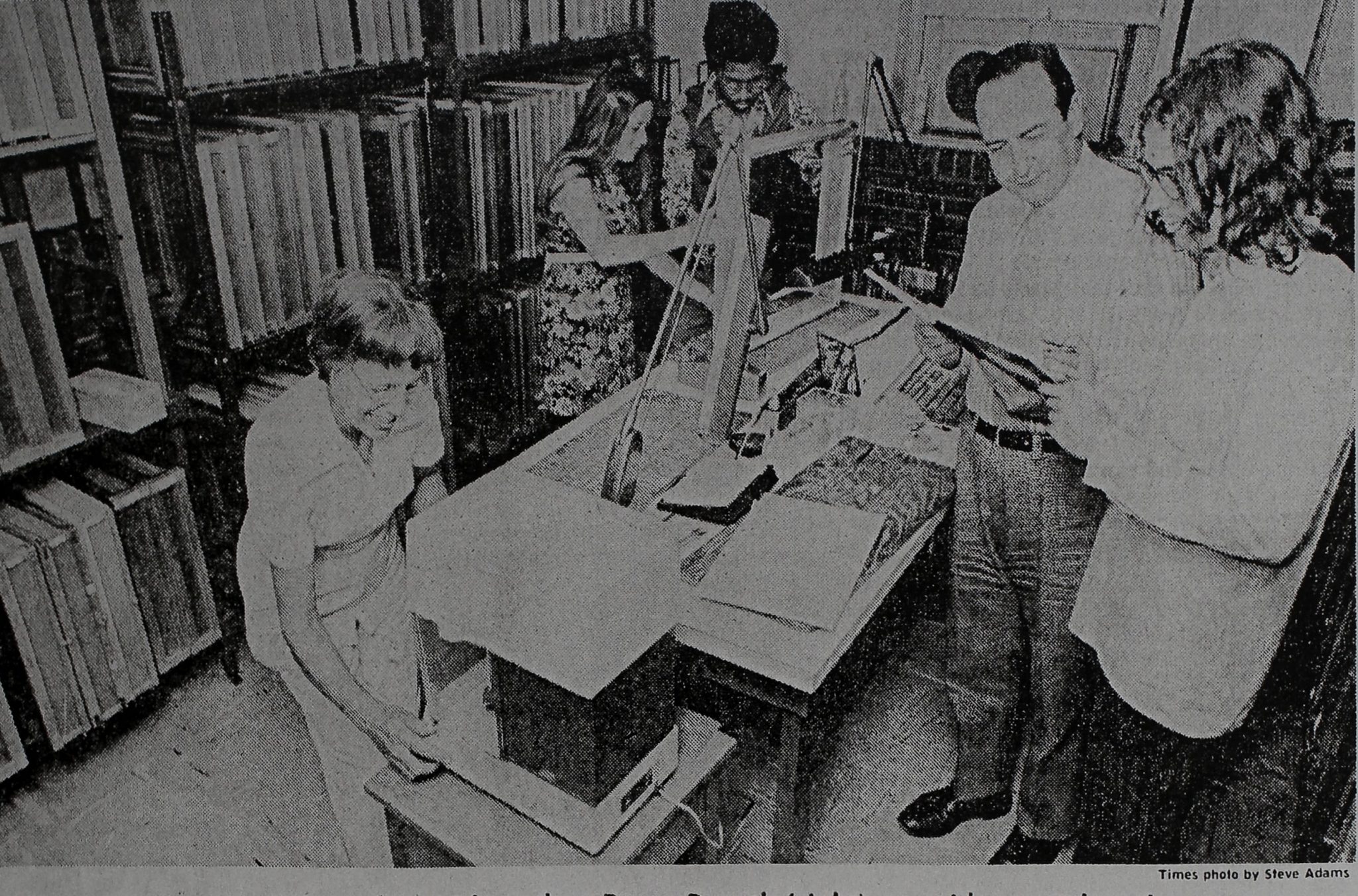 Raleiahite-heh^dSkvIe^Koiders
Dr. Peter N. Witt confers with student Bruno Paneth (right) on spider experiment
By TODD COLLINS
11 Times staff writer
A Raleigh researcher has inspired a trip into;
space Ur spiders on the Skylab II mission Saturday.
The spiders will be used to study the effects of
weightlessness and the psychological stress of
space travel.
Dr. Peter N. Witt, director of research f@r tjie N,
C. Department of Mental Health, thinks spiders are1
a uniquely.useful animal for the study of behavior in
space flight and everywhere else.
“No other animal in the world — including man
— leaves such a detailed record of its behavior day
after day as the spider”;’ he said.
The record is the web.
On the wall in his office in a basement at
Dorothea Dix Hospital, the Swiss-born Dr. Witt
pointed to photographs of two different webs made
by the same spider and smiled.
Even the casual observer could detect the
difference between a web created under normal
conditions and-one made under the influence of /
¡drugs.
Similarly striking differences may result
between a spider’s web on earth and the web after
the spider is shot into space.
Not only are the webs a delicate barometer of
behavior, they ¡are also accurate.
Scientists can be relatively sure that any changed
behavior patterns, as reflected in altered web for-
mations, are the result of a new condition.
’ “We have never found experience to play any
part in the geometric pattern of the web produced,”
Man, on the other hand, might do things in space
he ordinarily would not for any number of reasons.
It would be very difficult to say, for instance that
an astronaut bites his fingernails more often than
usual because of the effects, of weightlessness and
not because he was worried about his wife.
“Man can be affected by the power of suggestion.
. But you can’t tell a spider that he’s not going to do
well today and affect him ”, said Mabel Scarboro,
Dr. Witt’s research assistant of seven years.
Dr. Witt has worked with spiders and the webs
they produce under normal and altered conditions
for 25 years. He is an internationally recognized ex-
pert in the field of behavior.
“I’m basically interested in drugs,I found by acci-
dent that drugs affect web patterns,” he said.
Female “cross spiders,” members of a par-
ticular species with which Dr. Witt has worked ex-
tensively; in the past, will go along on the 59-day
space junket.
They will be transported by astronauts — perhaps
in pockets*— to the Skylab space station where
photographic equipment and cages are already in
place.
The information will be sent back to earth where
it will be recorded on computers.
Witt said the spiders might weave normal webs,
distorted webs or no webs at all. “We just don’t
know,” be said.
* – One possibility — but only that — is that the cross
spider, will weave a round web. Under normal con-
ditions the spider constructs an elongated web
because, of the effects of gravity.
The National Aeronautics and Space Administra-
tion contacted Witt about the spider experiment
after it was suggested in a national contest seeking
ideas for Skylab research.
A high school girl from Boston, having read of
Witt’s work, made the suggestion.
“She really knew nothing about it except she
thought it was a good idea,” said Witt.
Witt has served as a consultant for NASA for this
experiement.