You are here: Home / Projects / REGULATION OF PROTEIN PRODUCTION IN THE SILK GLANDS…Comp. Biochem. Physiol. 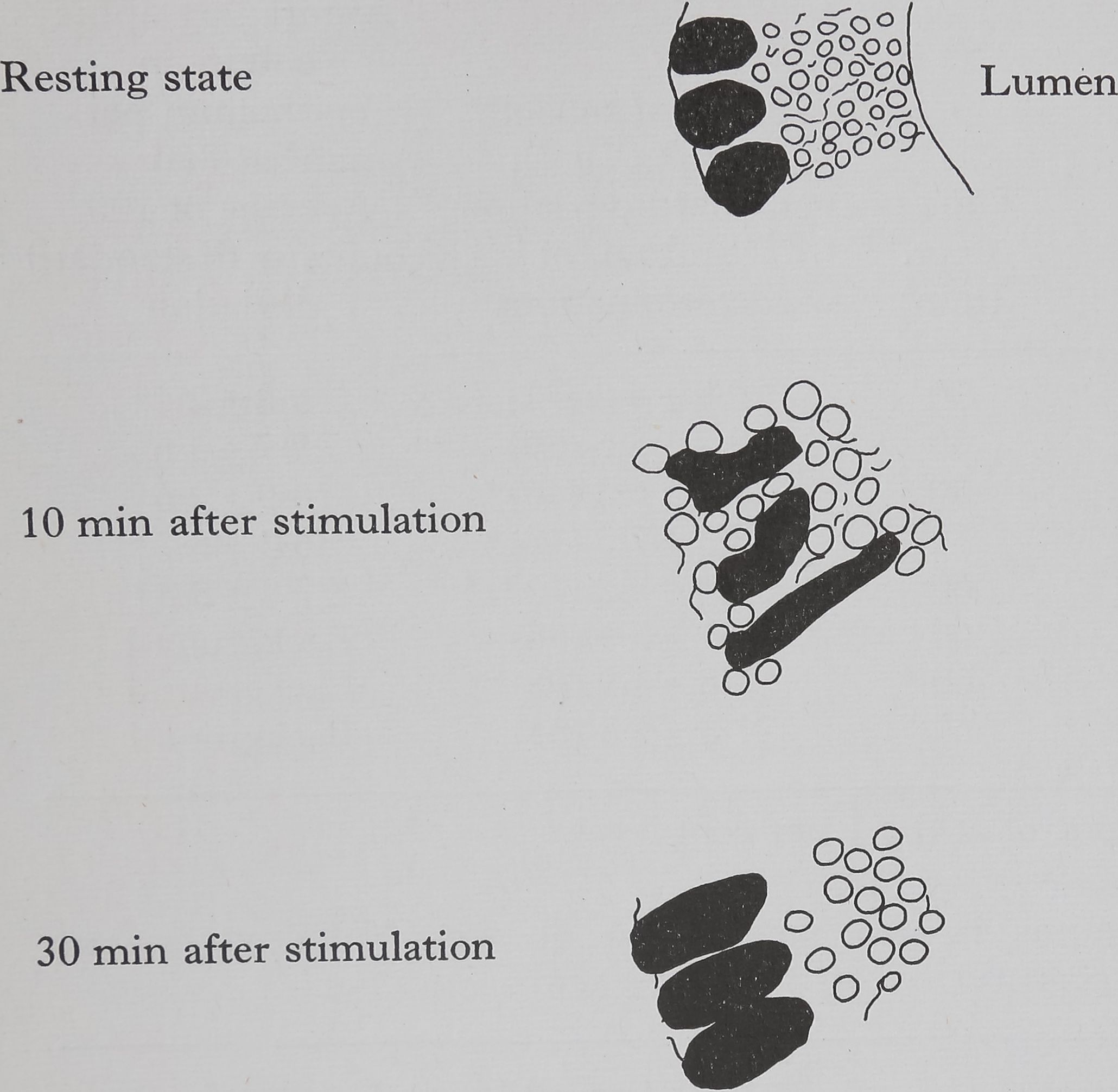 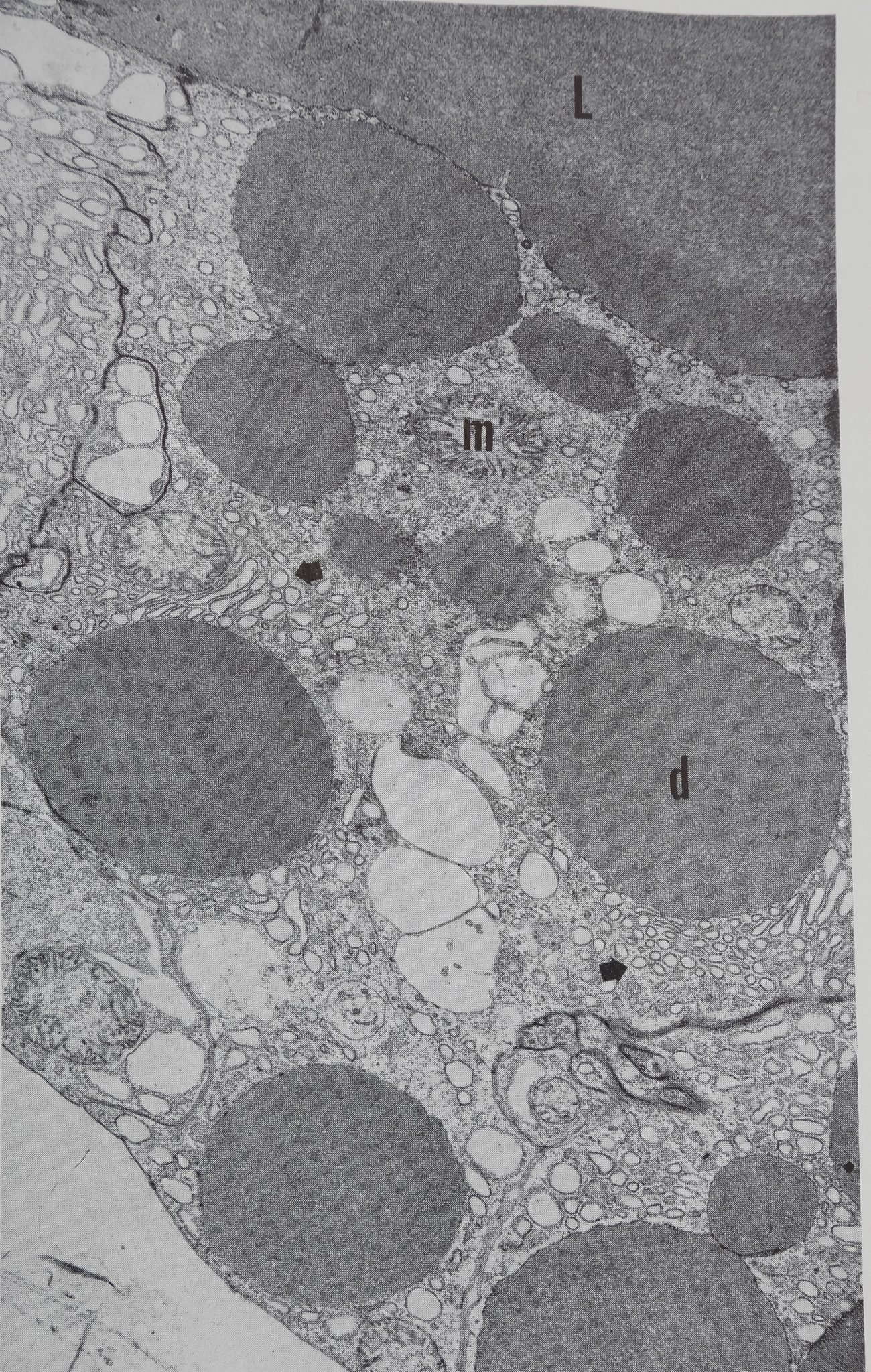 REGULATION OF PROTEIN PRODUCTION IN THE SILK GLANDS OF SPIDERS*

Abstract—1. A single injected dose of acetylcholine into the spider, Araneus sericatus, causes secretion of performed fibroin from the ampullate silk glands.

2.    Puromycin inhibits the increased synthesis of new protein but does not affect the initial secretion. Thus the processes of secretion and synthesis can be separated.

3.    A scheme is proposed for the overall regulation—both central and local— of the protein production in the ampullate gland of Araneus sericatus.

The silk gland of the spider has been found to be a convenient system for the study of a mechanism which regulates protein synthesis in relation to the total economy of a simple organ. The ampullate silk gland has as its sole function the rapid production of a single protein which is used to construct the scaffolding of the daily web (Peakall, 1964a). Previous experiments have demonstrated that the rate of incorporation of amino acids can be stimulated by cholinergic materials both in vivo and in vitro (Peakall, 1964b, 1965). Stimulation of protein synthesis can also be accomplished by emptying of the gland. In this paper the effects of a single dose of acetylcholine are examined and a scheme for the overall regulation of the gland is presented.

MATERIALS AND METHODS The spiders (Araneus sericatus) were emptied of thread 24 hr before the start of the experiments. This was to ensure that the ampullate glands were in as uniform a physiological state as possible. In all experiments sections were made of the abdomen and alternate sections were stained with Azure B, or hemaoxylin and eosin, or prepared for autoradiographs.

was injected at the start of the experiment. Half of the spiders were given acetylcholine and killed after given time intervals as before.

Two sets of experiments were performed to observe the time sequence of changes in nucleic acids following stimulation. The spiders were injected with T3-thymidine (10 mc/kg) 2 hr prior to the start of the experiment. Half of the spiders were given acetylcholine and were killed after given time intervals as before. The glands were immediately removed and fixed in buffered formaldehyde. The sections were treated with RNAase [0-2 mg/ml, 45°C, for 4 hr, Flax & Himes (1952)] and then alternate sections were made into autoradiographs or stained with Azure B. In the second set of experiments T3-orotic acid (experiments failed to show incorporation of uridine) and DNAase were used in place of thymidine and RNAase. The conditions for DNAase treatment used were 0*1 mg/ml in phosphate buffer, pH 7*5, 0*1% gelatin, 0V03 M MgS04, 3 hr at room temperature and Azure B, 0*1%, pH 4-0, for 2 hr at 40°C, washed briefly in water, differentiated overnight with ¿-butyl alcohol. The density of the staining with Azure B was measured cytophotometrically at 545 m/x, (Ritter et al., 1961).

The localization of injected acetylcholine was examined by injecting C14~ acetylcholine (5 mc/kg) in the abdomen and killing the spider 5 min later. Autoradiographs were then made of the sections.

Gland tissue was excised from the animal in Krebs-Ringer and immediately dropped into a fixative consisting of 1 part 0*25 M sucrose, 1 part 7*3% P.V.P. (polyvinyl pyrrolidinone) and 2 parts osmium tetroxide (Di Stefano & Dougherty, 1964). The fixative was maintained at pH 7*4 with 0*01 N sodium hydroxide. The specimens were then double embedded » ligar and maraglass (Freeman & Spurlock, 1962), sectioned on a LKB ultratome and examined in an RCA EMU-3F electron microscope.

Acetylcholine causes the appearance of droplets of protein throughout the epithelium within 10 min, this is shown diagrammatically in Fig. 1. Examination of the autoradiographs shows that these droplets are unlabelled and therefore consist of material which was present in the cell before the injection of acetylcholine. The presence of small droplets (3-5 ¡jl dia.) in the epithelium of the resting gland can be seen in the low-powered electron micrograph (Fig. 2). This photograph shows the overall structure of the epithelial cell and is part of a study of the changes in the fine structure of this gland after stimulation (Bell & Peakall, 1966). The droplets move towards the epithelium-lumen boundary, and after 30 min the droplets are largely in the luminal portion of the epithelium (Fig. lc) and all droplets are discharged into the lumen within an hour. Histological examination (both light and electron microscope) shows that the secretion causes considerable disturbance in cell structure.

In the absence of puromycin, injection of acetylcholine brings about a significant increase in the uptake of labelled alanine after 1 hr (see Table 1). The values for 30 min do not vary significantly from controls. There is a significant

PROTEIN PRODUCTION IN THE SILK GLANDS OF SPIDERS

increase in nuclei size after 30 min and by 1 hr the size has approximately doubled. In the experiments in which the spiders were pretreated with puromycin the uptake of labelled amino acids was almost completely stopped and was, in fact, much less than the amount taken up by the resting gland. Also there was no alteration in the size of the nuclei of the epithelial cells. These results are also given in Table 1. Thus pretreatment with puromycin separates the stages of secretion and synthesis.

Protein droplets mainly in the luminal portion of the epithelium, enlarged nuclei near outer membrane

The time sequence of changes in nucleic acids following stimulation were studied histologically and by observations on the uptake of labelled materials. In the resting gland the nuclei have a few small dense particles of DNA, 10-20 min after stimulation these particles increase in size and after 30 min the nucleus is largely, although diffusely, filled with DNA. The autoradiographs show a marked increase in labelling 20 min after stimulation and no appreciable increase thereafter (Table 2).

The results of the cytophotometric determination of RNA are given in Table 2. There is a marked rise in the concentration of RNA in the cytoplasma starting 10 min after stimulation and maximum values are reached within 30 min. Glands pretreated with puromycin showed a distinct rise in the 10 and 20 min values, almost paralleling the non-puromycin experiment, but this rise stops after 20 min

and has returned to control values within 60 min. It is considered that this rise is due to concentration of the ribosomes by the droplets of protein which are released at this time (Fig. 1). The amount of new RNA is indicated by the difference between the puromycin and non-puromycin values. This is then in agreement with the orotic acid incorporation data (Table 2). That the incorporation of both

* Significantly different from control at the 1 per cent level.

Extinction coefficient of Autoradiographic counts of    Azure B in the cytoplasmaf

deviation of 50 counts. Background was 0-4 counts/mm2.

In the center of the ?§$ßpty]ß clear vesicles of unknown nature are apparent. Cell borders on adjacent gland cells pay be seen at the upper left and lower right where specialized thickened areas of the plasma membrane are evident. Magnification 7560. Electron microscopy by Mr. Allen Bell.

PROTEIN PRODUCTION IN THE SILK GLANDS OF SPIDERS

orotic acid and thymidine is blocked by puromycin suggests that some specific protein synthesizing step must be involved in the activation of the gland to increase fibroin synthesis. In this respect it is similar to the estrogen-induced protein synthesis found in the particulate fractions of rat uterus (Noteboom & Gorski, 1963).

Cholinergic regulation of the amount of thread used in web building by Araneus diadematus has been found by Witt (1962, 1963). Several cholinergic agents, physostigmine, carbachol and paraoxon.* have been shown to increase the rate of incorporation of labelled alanine into fibroin (Peakall, 1964b, 1965). In addition, the gland can be stimulated by continuously reeling out the silk until the gland is empty. Studies on isolated glands have shown that stimulation by cholinergic drugs can be blocked by atropine, whereas stimulation caused by emptying the gland cannot be blocked by this agent. Thus, two, at least partially independent, modes of regulation exist for this simple organ. The initial stimulation may be either cholinergic (la) or by emptying the gland (lb). These two methods of stimulation are separated by their sensitivity to atropine. This is followed in both cases by an increase in the rate of protein synthesis. The second process (2) is clearly separated from the others by pretreatment with puromycin.

receptor on outer membrane of gland

(2) Signal after release of presynthesized fibroin from epithelium

It is possible to theorize that two modes of regulation—one via the central nervous system which could transmit external stimuli and the other local in character dependent on the amount of fibroin present—might be useful for the quantitative control of silk production in the spider.

The nature of the various “signals” is unknown. Hokin & Hokin (1963) have found that acetylcholine stimulates the secretion of a variety of substances. This includes digestive enzymes from pigeon pancreas; mucin from rabbit and guinea-pig submaxillary glands; pepsin from the pigeon peptic mucosa and salt from the

albatross salt gland. These workers have studied the role of phosphatides and conclude that the stimulation of the secretion of a variety of water-soluble substances is associated rather specifically with an increase in the metabolism of phosphatidic acid and phosphoinositide and to a lesser extent with other phosphorus compounds. It is possible that a similar mechanism operates in this system. The signal for the second process, namely increased synthesis, can be assumed to be a type of end-product inhibition (Monod et al.y 1963; Atkinson, 1965). It is planned to investigate this “signal” in a cell-free system.

Acknowledgements—I am grateful to Dr. P. N. Witt for much helpful discussion and to Mrs. E. Garvin and Mr. D. Gerstein for technical assistance.

Hokin L. E. & Hokin M. (1963) The role of phosphatides in active transport with particular reference to sodium transport. In Drugs and Membranes (Edited by Hogben A. M.), pp. 23-40. MacMillan¿|kew York.

Peakall D. B. (1964b) Effects of cholinergic and anticholinergic drugs on the synthesis of silk fibroins of spiders. Comp. Biochem. Physiol. 12, 465—470.