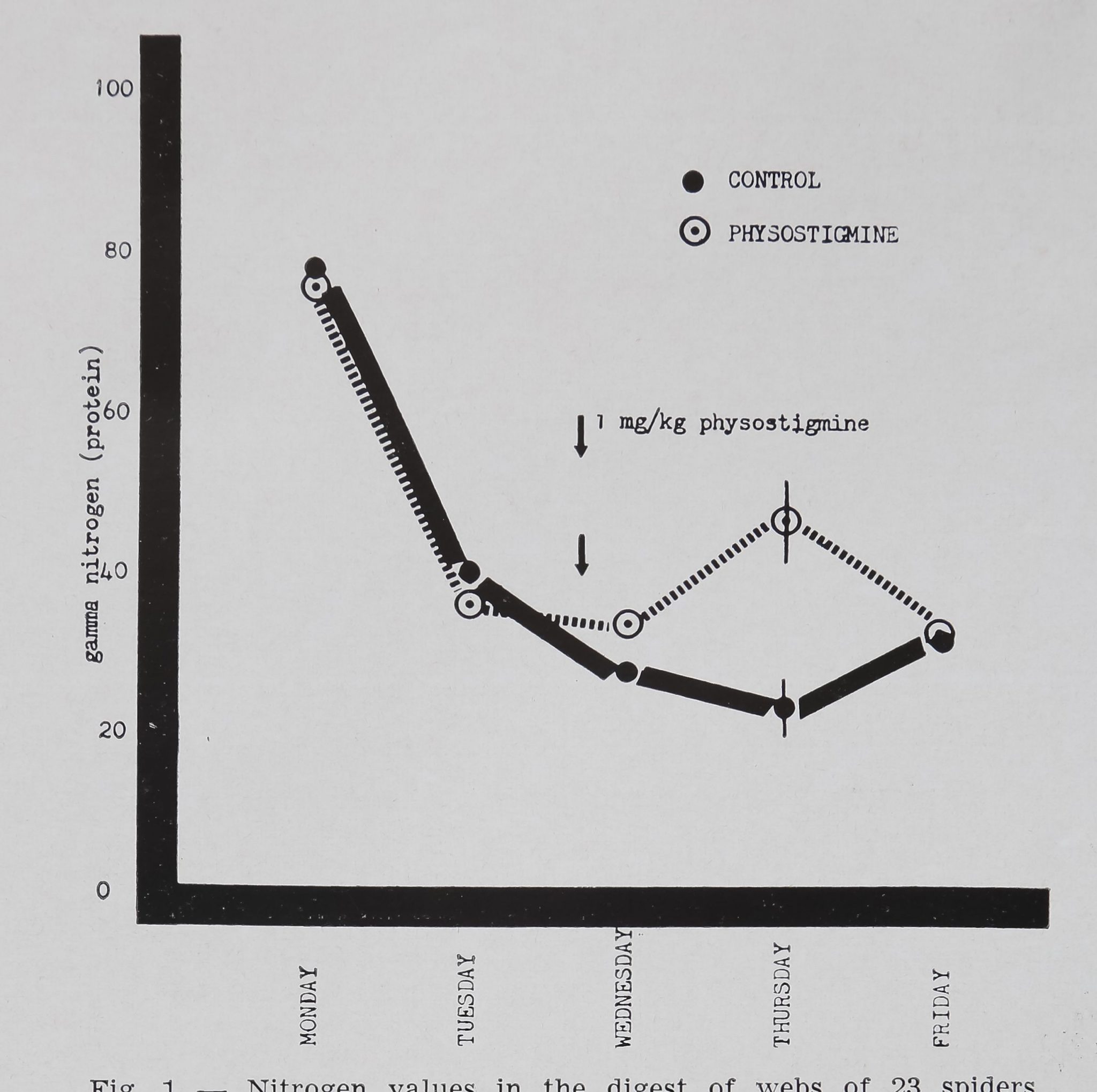 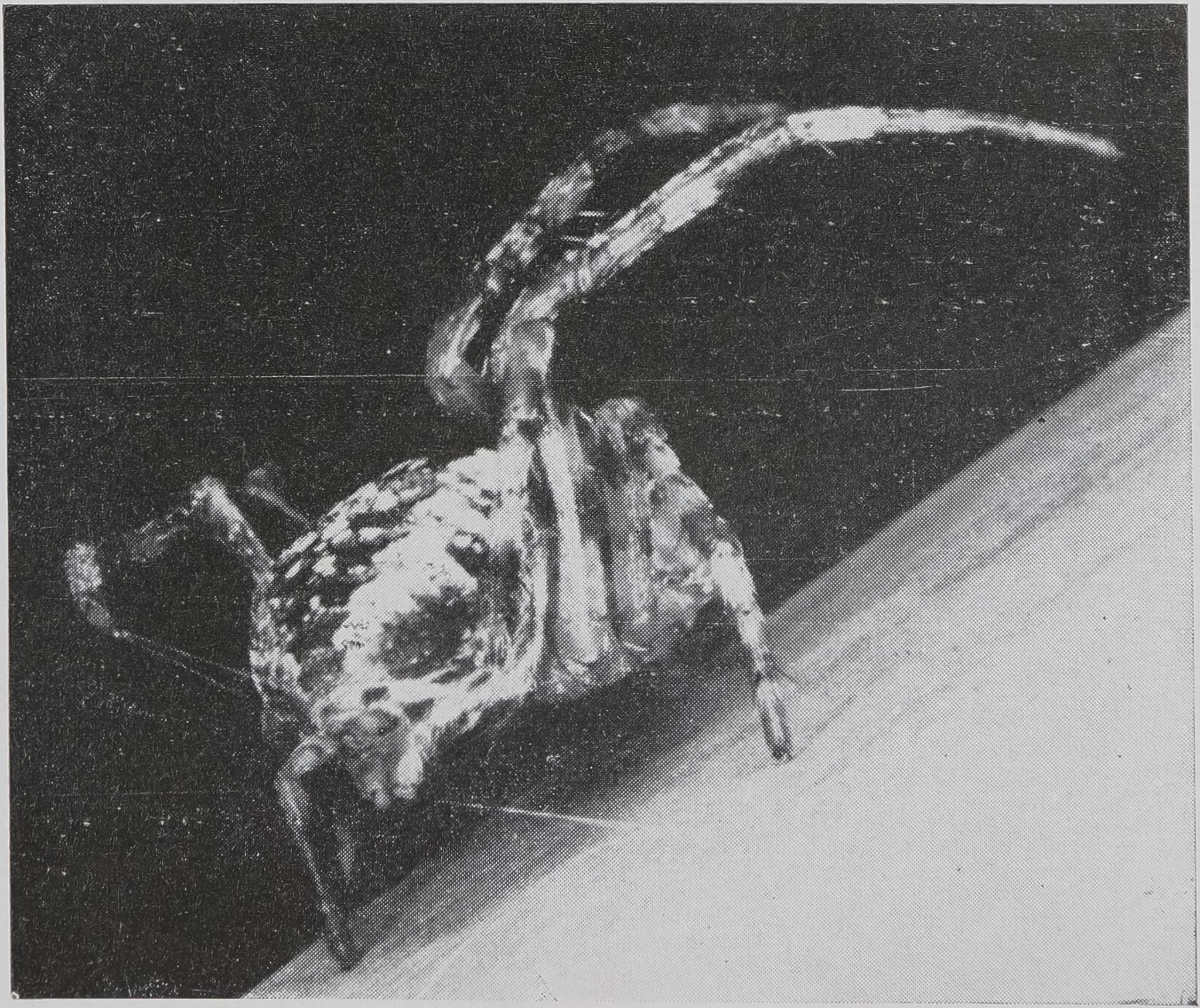 There exists evidence’ that the silk glands of the spider Araneus diadematus Cl. work in closé connection with the central nervous system IlCNSlB The CNS appears to send signals to theSglands, Btélling” them to prod^E m<^E or l^E silk; it seems also ¡^informed” of the amount of Hlk availably in the ampullate glands at a given timet Silk billig so important inB|Hlspider’s life — for trap-building moving around, and Communication — such two-way mechanisms appears °fsurvival valuel^enoijgh material is made* available, but no: energy is Wetted on excess. The close interrelationship ßffteen CNS and glapds explains that drug«which affect CNS fppetion, the psychotropi|||t influeriqSéilk gland activity and that webs built aftep the|| druggy reflect their effects in wWgjB§§ht and -pattern. The evidéjíce will be reviewed.

To Establish the amount of silk which a|£spider uses for one web, thlÉ whole structure is cut off from its supports, rolled up on a piece of relatively nitrogen-free filter paper, and digested in iselenium-sulfuric acid. The amount of nitrogen determined with an optical micromethod in the web diJilt is a measure of the total amount of poly|feptiJ^H| the weßT Fi|§l, 1 shows^jhe . results of an Experiment with 23>spiders which were treated with, 1 mg/kg physostigmine by mouth in sugar water and 23 control animals. The webs were digested daily and on Tuesday both groups showed the same mean of 39 microgram N jSgHwel^ 36 hours after the drug had been given, oñ Wednesday^ morning, th^ physostigmine-treated animals had built webs ^Containing a mean of 48.9 ||1|4.4 microgram N per web, while controls built significantly lighter webs with 20-30 micrograms N. The following day*, Friday, all animals, controls and drugged spiders, built webs with the same mean of j|4.5 microgram N per web. It was concluded that webs after physostigmine are heavier or contain more polypeptide thread.

In order to test the hypothesis that the cholinergic drug ^stimulatesf^ilk production rather than promotes a more thorough squeezing out of the ampullate silk glands, Peakall performed experiments using 3 kinds of methods (1, 2) :

A:    Glands were pulled empty of thread at regular intervals, f .e. every 6

Fig. 1 — Nitrogen values; in the digest of webs of 23 spiders treated with 1 mg/kg physostigmine on Tuesday night (12 hours before the Wednesday web-building time)>: and 23 controls. Each point represents the mean K ‘all measurement and the vertical line the standard error of the mean. The tvH Thursday values are Mgnificahtly different below^ the i^Bprobability leveM Note the increase of web nitrogen 36 hoursf^ift^r the drug.

injecting it into the!|: spiders’ abdomen, and measuring the speed with which the label turns up in the silk. 6 hours after alanine was given, significantly more label appeared in the silk after physostigmine, carbachol and paraoxon than in untreated spiderS (Table I). It was also found that just emptying&the glands promoted incorporation of the label, and that emptying plus drug treatment was not additive, but rather made the glands behave like after one treatment alone. We can therefore assume that two mechanisms regulateIfpeed of silk production: 1) a feed-back from the lumen of the gland via the inner epithelial membrane and 2) a possibly neurohumoral mechanism via the outer epithelial membrane.

C: A third way of measuring changes in silk production is the use of radioautography : the labelled silk precursor, again 04 alanine, leaves black dots on a photographic film which is spread thinly over the sliced tissue. By using this method at different times after alanine injection, its progress from the body fluids into the gland epithelium and from there into the gland lumen can be followed. Table II shows that 4 hours after injection of 04 alanine, most of the label had left the intestine and blood of the spiders and appeared in the gland lumen in pulled or physostigmine treated animals, while atropine treated

The labelled alanine was given at the start of the experiment. Thread was pulled for determination 6 hr afterwards. (From D. B. PEAKALL, Comp. Biochem. Physiol., 12, 467, 1964).

of spiders counts/min the mean 100 mg b.wt. the mean

or resting glands had not yet taken up the bulk of the label. In histological slides the size and shapes of the ampullate glands and the position of the label can be identified.

If we assume that acetylcholine is the neurotransmitter substance which is responsible for carrying the signal for silk production from the nerve to the gland tissue, we must look for places on the gland which could bind acetylcholine. PeakalFs work shows autoradiographic proof that labelled acetylcholine is accumulated on the gland epithelium. Thiéjlis poSbly the area for reception of the neurohumoral signal.

Let us now take a look at the whole animal and see the geographical location and possible interrelationships of silk glands and CNS in Araneus diadematus Cl.

F. Meier (personal communication) has identified nerves • leading from the big subesophageal ganglion in the cephalothorax to the silk glandS Such nerve# could carry signals in both directioii|Bcoordinating leg movements of the webbuilding spider with silk supply in thelgland.

Behavioral experimentJwith web-buildingMspid||s; have shown that there are 3 possible, ways which can lead to webs built with ^Shorter thread :

through the, second day after drug application. The interpretation assumes that atropine’ shows its eff^S on polypeptide^ppnthesis in the spider’s glands as well as interfere! with * centrally rigulated exactness of movements. It is interesting to note that not the size*; of th3 catjlling arf4 in the web was decreased when less thread was availaljliffl but thli shorter thread was wider spaced so that the trap was f||ill®ize and onlgUbst thB smallgt BBtfets.

2.    v’lSpidejg also Inbuilt webs \^ith” .shorter thread after a wef|jjSt had been attached to their backs. These experiment® 3|| wefl undertaken to test the hypothesis that psilocybin, the hallucinatory mushroom poison¿;;-caused in’ spiders similar effects as an inéfeáse^in body weight. Thisftsubstance is known to change in man perception of one’s body. Doel a spider after psilocybin > r-‘f eel” heavier and therefore buildi^ja wÄht-we§j? It could b;é¿ shown that 150 mg/kg psilocybin given to 9 and 23 spiders in two independent experiments 12 hours before web-building time, as well as a 30^» increase, in body weight of 15 spiders, decreased average thread length significantly by about 30%. However, when the webs were digested and N determined, a significant difference in the amount of silk was found between the, psilocybin and weight-webs: the webs after psilocybin were built with less silk, the shorter thread was as thin as before; the heavier spiders, in contrast, built webs with thicker thread, using equal amounts or even more protein than before. The interpretation for the results of the experiment with heavier spiders assumes that they built a thicker thread to hold themselves up; as they had no more material than usual in their glands, the thicker thread had to be shorter. The psilocybin webs must be interpreted in a different way, as will be seen later. If the interpretation is correct, the spiders’ CNS must integrate information on thread length as well as silk quantity stored in the glands during web construction.

3. Experiments performed under the influence of the tranquilizer Valium (diazepam) may help to interpret psilocybin effects (4). When 100 mg/kg Valium were given to 40 spiders 36 hours before web-building time, all animals built smaller webs with a shorter thread and less material. This could be the result of a decrease in silk production in the glands through the tranquilizer, or the glands were not completely emptied at the end of web construction. Experiments with thread pulling after Valium answered the question in favour of the second interpretation: when silk was pulled from 13 spiders one and two days after 100 mg/kg Valium and from 9 control spiders, no difference in quantity could be found. The effect of Valium is therefore interpreted as possibly affecting the spiders5 J|drive55 so that they build smaller webs using only part of the material. The glájads stay partly filled at the end of the construction period. This^in time, would slow down new silk Synthesis by the feed-back mechanism which was shown by Peakall.

Thus, the three waysliin which webs with shorter thread were produced through drugs and weight changes,-, provide^ some evidence for the clop interconnection between silk glands and CNS.-. If the tranquilized CNS “instructs55 the legs to build a smaller web, less silk is pulled from thelgglands. Fig. 2

illustrates how the spider pulls silk from the spinnerets by means of its hind leg. It can also lower itself on the thread through its weight and regulates speed and possibly thickness with the eighth leg. The funcition of Wilson’s control valve (5,6) in this process and its interrelationship with CNS and glands is a matter for future investigations which will we hope further clarify psychotropic drug effects on web-building.