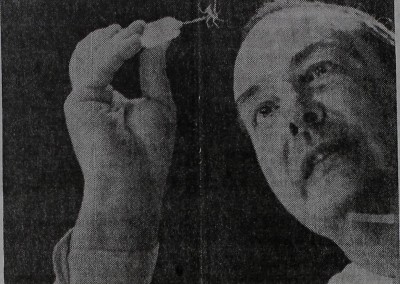 KNIGHTDALE, N.C. — To many spiders, the web is everything.

I For the approximately 15,000 species of web-building spiders, most of them nearly blind, the web is their essential window on the world: their means of communicating, càpturing prey, meeting mates and protecting themselves. A web-building spider without its web is like a man marooned on an island of solid rock, totally out of touch and destined to starve to death. A fly could walk unmolested right under the nose of a webless spider.

Perhaps nö one knows this better than Dr. Peter N. Witt, a physician-pharmacologist who 37 years ago was seduced into a career-long study of spiders and their silken domiciles. In 1948 a frustrated zoologist at the University of Tübingen in west Germany turned to his pharmacologist colleague for help in photographing orb-web spiders in the process of constructing their homes. The spiders normally perform this task in the dark around 5 A.M., which is not exactly ideal for movie making. The zoologist wondered if his subjects might be drugged into changing their construction time.

Young Dr. Witt had no trouble feeding the spiders sugar water spiked with various stimulants or tranquilizers; the animals normally liquefy their food before sucking it into their gut and, Dr. Witt said, “They are always so short of water that they quickly learn to come to your syringe.” But the movie-making zoologist was not exactly pleased with the results. The drugged spiders still built their webs in the early-morning darkness, and now the resulting webs were bizarrely abnormal, as if built by a drunk.

The zoologist abandoned the movie, but the pharmacologist was hooked. Here, he explained m a recent interview, was a reliably reproducible means of assessing the behavioral effects of drugs with mind-altering potential. Each drug seemed to produce characteristic aberrations in the spiders’ webs, changes far more reliable than the behavioral effects of drugs observed in laboratory rats or human subjects.

But before he could test for web abnormalities Dr. Witt had to know a lot more about the architectural precision of normal webs. With the solitary orb-web spider as his subject, he began by measuring the length and number of threads in each web and calculating the angles where threads intersected. With more than 2,000 points to evaluate per web (ana at least 40 webs to analyze per test), Dr. Witt’s project was saved from the scrapheap of good-but-impractical ideas by the advent of a now commonplace analytical tool, the computer. Dr. Witt, in cooperation with the International Business Machines Corporation, developed a program that enabled the computer to generate a proper model of a spider web when fed information about 200 points, a -manageable number of measurements.

Each Web Is Unique Since the orb-web spider builds a new web each day, it was possible to do repeated tests of different drugs without having to collect and house thousands of spiders. Dr. Witt’s detailed analyses revealed that while all orb-web spider webs look basically alike, each is unique to the spider who built It. In fact Dr. Witt was soon able to identify escapees by their webs. The webs also reflect genetic relationships; those built by sibling spiders are more alike than those con-

new silk. In studies with radioac-tively labeled materials, Dr. Peakall found that 95 percent of web protein reappears in the next day’s web. Most of the energy needed for web-build-ing, which Dr. Witt estimated to be half a fly a day, is used in* walking over the strands as they are laid down.

Dr. Witt is also impressed by the adaptability of the spider’s highly preprogrammed brain, which is larger for its size than the brain of any other invertebrate. If web-building is interrupted, or if some of the existing strands are destroyed, the spider simply retraces its steps to see where the web left off and then finishes building a normal web. One spider will even finish building the incomplete web of another.

With each web, the spider builds just enough to deplete its silk supply. If the silk is artificially depleted (for example, by forcing the spider to repeatedly start a new web), it adjusts by making a smaller but otherwise normal web. This adaptation requires some sort of advance planning, since the sticky spiral of the web is laid down from the outside in.

The spider also seems to learn from experience to use its web in different ways. Dr. Witt said orb-web spiders can be trained to react to different vibration frequencies induced by different prey insects.

The orb-web spider was one of the animals tested in the space program for effects of weightlessness. Without gravity, the usually oval web that is larger below than above the hub became rounded and evenly spaced because the spider was not guided by the weight of its body. But after just three days in space, in what Dr. Witt calls “a masterpiece in adaptation,” the animals were able to build nearly ( normal webs despite the lack of gravity’s tug.

tnis lover of oddball animals (now ré&ff*lgfl‘*i : tired to a farm here That iff home to mouflon sheep, Nubian goats, llamas, emus and ostriches), the spider — a mere one two-hundredth of an ounce and two-thirds of an inch long — held! an irresistible fascination.    ■

Orb-web spiders build what people might call the prototypical web.J Strung vertically between two objects, three or more feet apart, the orb web| resembles a planned community:* business district at a central hubJ with roadways radiating outwardf that are interconnected by concentric/ rings of roads around the hub. in façtJ as suggested by a 18th century Dutch} print, .there is evidence that city plan-j ners of centuries past used the orb| web as a design guide, as reflected || the construction of such urban features as the Place de L’Etoile in Paris or the radially designed Karlsruhe. j Orb-web spiders sit at the hub, or free zone, of their individual webs and await vibrations of the silken strands, \

When the right pulse is detected, the spider dashes out to grab the prey trapped in the sticky zone of the web.

Studies of various trapped insects and of vibrations induced by a tuning fork showed that the spider is highly selective In its reponses. The extreme’ agitation of a bee snared in the web is j ignored (to the bee, the spider might | have been prey rather than preda- j tor), whereas the more delicate vibration induced by beating fly j wings triggers instant feeding behav- ; ior.

A male spider bent on fulfilling Us I sexual destiny risks becoming the female’s dinner unless he properly executes his mating signals and remains always ready to beat a hasty retreat.

The male interested in mating remains in the outer parlor of the web and announces his intentions by repeatedly drumming or plucking on ; the sensitive silks. Eventually the fe- ;

The web tests of drugs indicated that while two drugs may produce , near-identical behaviors in. higher animals, their dissimilar mech< anisms ôf action result in different disruptions in web construction. So acutely sensitive is the web test that, through it Dr. Witt could detect residues of the antipsychotic drug scopalamine in the urine of a psychiatric patient who was taking the drug. However, web tests of various body fluids from psychotic patients revealed no evidence that mind-altering chemicals produced in the patients7 bodies were responsible for their mental symptoms.

“If mental patients had such substances in their blood or urine, it’s likely we would have found them,” Dr. Witt maintains.

male may be won over and allow him to enter her bedroom unharmed.

So vital is the web to an orb-web spider’s survival that, Dr. Witt and his colleagues showed, the animal will continue to construct new webs daily even if It is being starved. For 16 days the starving spider builds completely normal webs. Then, as the animal gets scrawnier and scrawnier, It constructs a wider-meshed web using fewer strands. Such webs would only trap larger prey, which is more economical from the perspective of a starving spider.

Dr. David Peakall, a Toronto entomologist and former collaborator of Dr. Witt, showed that the spider conserves energy by recycling web protein. It simply eats Its own web each evening and reuses it to manufacture