You are here: Home / Projects / The “Fingerprints” of Drugs 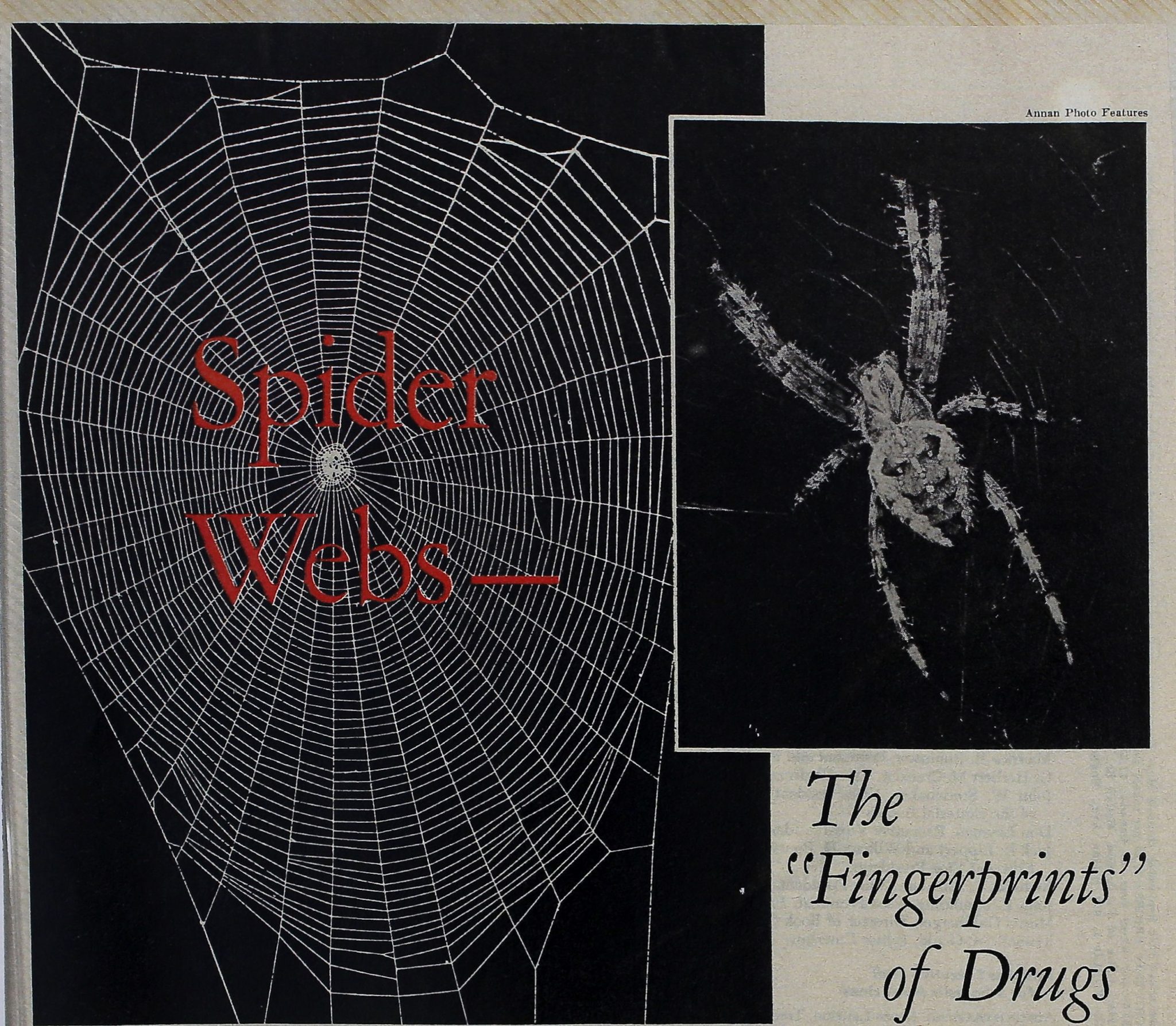 æ HE FIRST RAYS of the rising sun reddened the sky over the famous German university. Inside a brightly lighted laboratory, the members of a team of biologists rubbed their tired eyes. For several nights in a row, they had kept a silent—and discouraging—vigil.

Armed with a movie camera and bright lights, , the biologists had hoped to film a spider at work on its intricate web. But the spider-accustomed to working in darkness— would not spin its wéb while the lights blazed.

Wearily, the men discussed their problem Could they find a way to make the spider buiid its web in the

fight? They knew that certain drugs stimulated the activity of human beings. Would one of these overcome the spider’s reluctance J:o perform in the glare of the spotlights?

The biologists decided to obtain some drugs of this kind from a colleague, Dr. Peter N. Witt. Dr. Witt is a pharmacologist—a scientist who studies drugs and their effects.

But the results were disappointing —at least to the team of biologists. For the drugs failed to make the spider spin in the fight. What’s more, when the scientists switched off the lights to see what would happen, the spider built a web that was strangely shaped.

As so often happens in science, this unexpected result opened up a new frontier för research—but in the study of drugs.

In studying the effects of drugs on human beings, Dr. Witt had run into a roadblock. Some of his experimental drugs produced fantastic reactions—hallucinations, astounding dreams, and various emotions, including tears and laughter.

Dr. Witt wanted to measure these reactions scientifically. But when a human being was given an experimental drug, he could describe only what he thought he saw, or what he remembered of his dreams, or how he felt.

On the other hand, the spider is a very simple animal. And it also reacts to drugs. Could the spider’s reaction to drugs be measured scientifically?

Dr. Witt set out to learn all he could about the behavior of spiders. He decided to study the common garden spider. Easy to catch and observe, it constructs a silk web in a round pattern. The silk is produced as a liquid in glands within the spider’s body. As it is drawn out, the liquid hardens into thread.

The spider first attaches the end of a thread to a support, such as the frame of a window. It then builds the outside borders of the web. After this, the spokes are constructed. The angles between the spokes are almost exactly equal.

Finally, the spiral is woven—from the outside inward. The threads in the spiral—the catching area—are covered with a thin layer of sticky fluid. When , an insect lands on the catching area, the insect becomes stuck—easy prey for the spider.

When the web is finished, the spider retreats to the edge; resting its forelegs on ä “signal” thread running from the outer edge of the web to the’benter. It must rely completely on its sense of touch to tell it when an insect has been snared.

Suddenly, a fly collides with the vVeb arid is caught in its strands. Its wings beat frantically. But instead of escaping, the fly is actually announcing its presence. The thrashing of its wings sets up vibrations which are transmitted along the signal thread to the spider.

The Spider dashes forward, follows the vibrations to their source, and pounces. The spider’s poisonous bite paralyzes the fly! The spider then sucks the juices from its prey.

The spider’s behavior .follows a pattern that never varies. Furthermore, if its web is destroyed during the day, the spider will build a completely new one the following night.

The “Fingerprints” of Drugs