You are here: Home / Projects / THE INFLUENCE OF HEART RATE…The Journal of Pharmacology and Experimental Therapeutics 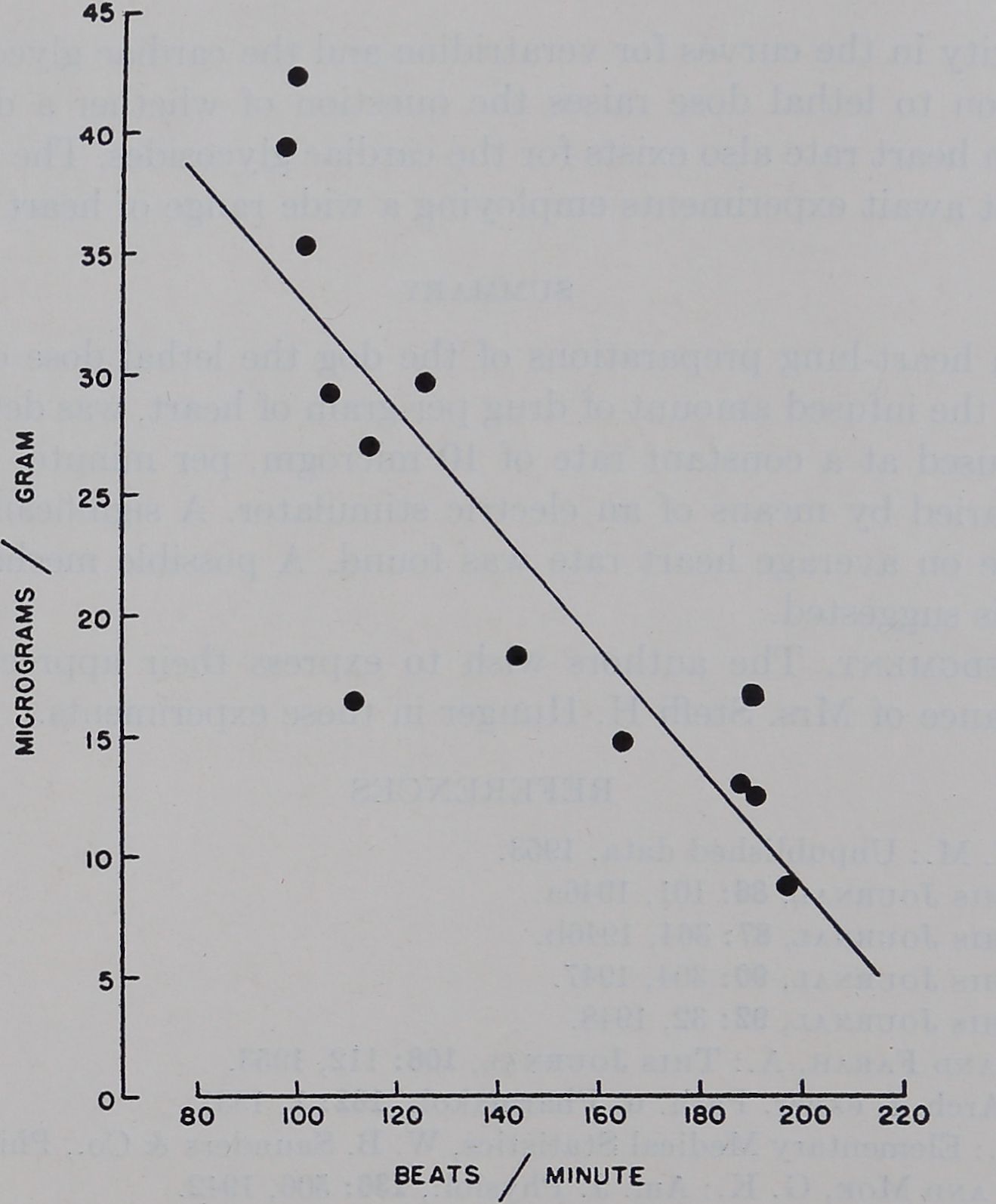 THE INFLUENCE OF HEART RATE UPON THE LETHAL DOSE OF . VERATRIDINE IN THE HEART-LUNG PREPARATION OF THE DOG

Reprinted from The Journal of Pharmacology and Experimental Therapeutics Vols’110, No. 3, Maxell, 1954 Printed in U.S.A.

Reprinted from The Journal of Pharmacology and Experimental Therapeutics Vol. 110, No. 3, March, 1954 Printed in U.S.A,

When certain drugs are administered bJ|Ä™rous infus® lung preparation of the dog, and whip the lethal    calcu

As the rate of infusipi, starting at high decreases progressively until’ at very low ?rj|l^Jt “tends This constant value has been designated b^|^sp* (1946Ä as the minimal |e%hal dose since this dose cannot be redullMlIv further^l^irease in theMj||?of administration. The characteristic highest rate Ä administration ^mvhiclMihe minimal lethal dose can still be obtained has b^^^feMthe optimal ratIHjirf ädminis tration (Farah, 1946a).

heart. Heart weight ina heart-lung preparationJlhan^es^nn^^^ltion of the. experiment since edema accumulation in the    the    lengthening

of the experimental time. The actual heart weign’ti^the^^^^^^^^^^pc^eri-ment represents initial heart weight plus edelpa iiiid. Various methods of cor-recting to true heart weight give widely different wSE • In tTOlM^emIi™ies’tFi-gation we have chosen for the correction of the heart weight tM bodv^wergm^^Bj weight ratio (Wood and Moe, 194lj)\. ‘

That the above mentioned factors influence the lethal1    beriiSdrffwB

The experiments to be reported followed which showed an early atrio-ventricular block, or än early sinUs bradycardia,, during ,veratridine infusion—^and as a result continued    a    few    rate-

seemed to survive relatively long and went into JiI>ri11:tt fusion of a relatively high dose. On the other hand, hearts in which these ,B| rhythmias occurred late during infusion, or did not occur at all,^brillatëd when

the dose infused was still low. This led us to explore the influence of heart rate on lethal dose at a constant rate of infusion.

Method. The dog heart-lung preparation was set up as described by Krayer (1931). Mongrel dogs of either sex weighing between 8.7 and 12 kgm. were used. The artificial resistance was set to give a mean arterial pressure of 100 to 110 mm. of mercury. The right atrial pressure was recorded with a water manometer; and in some experiments pulmonary arterial pressure was recorded with a bromoform manometer. Systemic output was measured with a Weese Stromuhr and initially was set between 600 and 750 ml. per minute. The blood volume varied between 850 and 1000 ml. at the start of the experiment, and the blood temperature was kept between 37.7° and 39° C. Heart rates were counted at least every two minutès by means of an inkwriting electroencephalograph used as an electrocardiograph. The endpoint of the experiment was either ventricular fibrillation as recorded by this machine, or a systemic output of less than 50 ml. per minute. The latter endpoint enabled us to include experiments with hearts that beat finally at very low rates and never spontaneously fibrillated. These hearts survived extremely long and the respective experiments would probably have been eliminated by other authors. Since we were interested only in the effect of heart rate, we included them with our other results, thus appreciably extending the range of heart rates.

The veratridine used was the free base prepared from veratrine4 by Deliwala and Kup-chan. It had a rotation of [q:]d5 + 6° (c. 2.00 in ethanol)1. Stock solutions containing 1 mgm. per ml. were prepared by dissolving the alkaloid in distilled water with an equimolar amount of hydrochloric acid. For infusion the veratridine solution was prepared freshly by diluting the stock solution with distilled water to the desired concentration of 480 microgm. per ml. The infusion was made into the venous supply cannula at a constant rate by means of a syringe with a motor driven plunger. The syringe was set to deliver 0.0208 ml./minute, which corresponds to an infusion rate of 10 microgm. per minute. In preliminary experiments it had been determined that this rate of infusion represented the optimal rate of administration according to the definition of Farah (1946a) and gave the minimal lethal dpse?1

In addition to the ordinary range of heart rate some hearts were stimulated at a rate of 190 to 200 stimuli per minute. For this purpose a Grass stimulator was used, delivering electrical square waves of 8 volts and 1 millisecond duration. The stimulus was transmitted to the right atrium through small electrode clamps clipped to the muscle tissue. The intensity of the stimulus was supramaximal.

The heart weight was determined by multiplying the body weight of the dog by a factor of 0.000763. This is an empirical figure found by Wood and Moe (1942) relating heart weight to body weight in the weight range of our dogs.

Results. The results of all our experiments are shown in table 1, in which the experiments are grouped in order of increasing average rate. In this sequence the dates are in approximately random order. .Column one, which gives the experimental times, permits the calculation of the amount of veratridine infused, since the rate of infusion for all experiments was 10 microgm. per minute. Experimental time multiplied by 10 gives the infused amount of drug in microgm. The total numbers of beats were obtained from the electrocardiogram taken at least every two minutes as described. Total number of beats divided by experimental time in minutes yields the number of beats per minute which is called average rate. The lethal dose in column 4 is the amount of veratridine infused in microgm. divided by the heart weight.

* Heart driven by stimulator, t Heart did not fibrillate spontaneously.

The coefficient of variation at the bottom of each column indicates the high variation of the lethal dose when only the rate of infusion and the heart rate are taken into consideration. The total number of beats, on the other hand, ||^the factor that varies least in our experiments.

Fig’ L The influence of heart rate upon the lethal dose of veratridine. Each point represents one experiment; the line shows the linear regression of lethal dose/gram heart weight on average rate with a regression coefficient b :-0.24. For further explanations see text.

The lethal dose, as measured, actually consists of three fractions the values of which are unknown. At the termination of an experiment some drug may be left in the’blood, and of the amount taken up by the heart only a fraction may actually have killed the heart. The fact that there exists a minimal lethal dose and an optimal rate of administration for veratridine, as well as for the cardiac glycosides, suggests that all of the infused drug is taken up by the heart. Since in our experiments a. rate of administration comparable to Farah’s optimal rate of administration was used, it might be assumed that the fraction of drug actually killing the heart, is identical with; or is in constant relation to, the lethal dose. On this basis tfiSi decrease of lethal dose with increasing heart rate might be accounted for by an increase in sensitivity of the heart to veratridine.

Since in our experiments the total number of beats is relatively constant, it is likely that veratridine acts at a metabolic level that is in some manner related to the heart beat, each beat representing a fraction of the total metabolic effect required for the heart to be killed. The fast beating heart makes available for drug action more fractions per unit time of this total requirement than does the slow beating heart and so arrives at the total or lethal effect sooner having required less drug (lower lethal dose) in the process.

In thirteen heart-lung preparations of the dog the lethal dose of veratridine, calculated as the infused amount of drug per gram of heart, was determined. The drug was infused at a constant rate of 10 microgm. per minute; and the heart rates were varied by means of an electric stimulator. A sigiSiicânt dependency of lethal dose on average heart rate was found. A possible mechanism for this dependency is suggested.

Acknowledgment. The authors wish to express their [appreciation for the expert assistance of Mrs. Steffi H. Hunger in these experiments.

The Journal of Pharmacology and Experimental Theraputics