You are here: Home / Projects / The Spider’s DilemmaNew Scientist 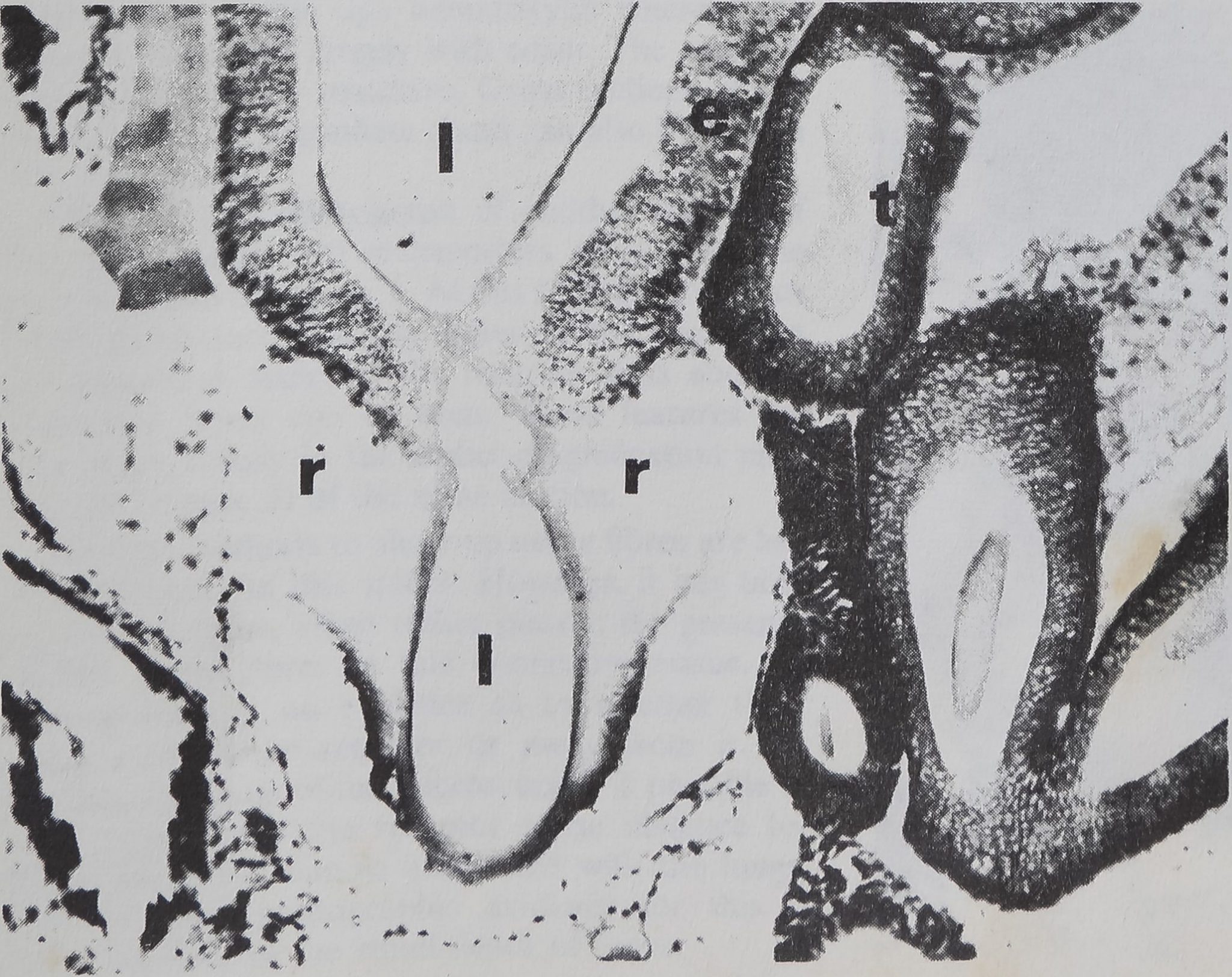 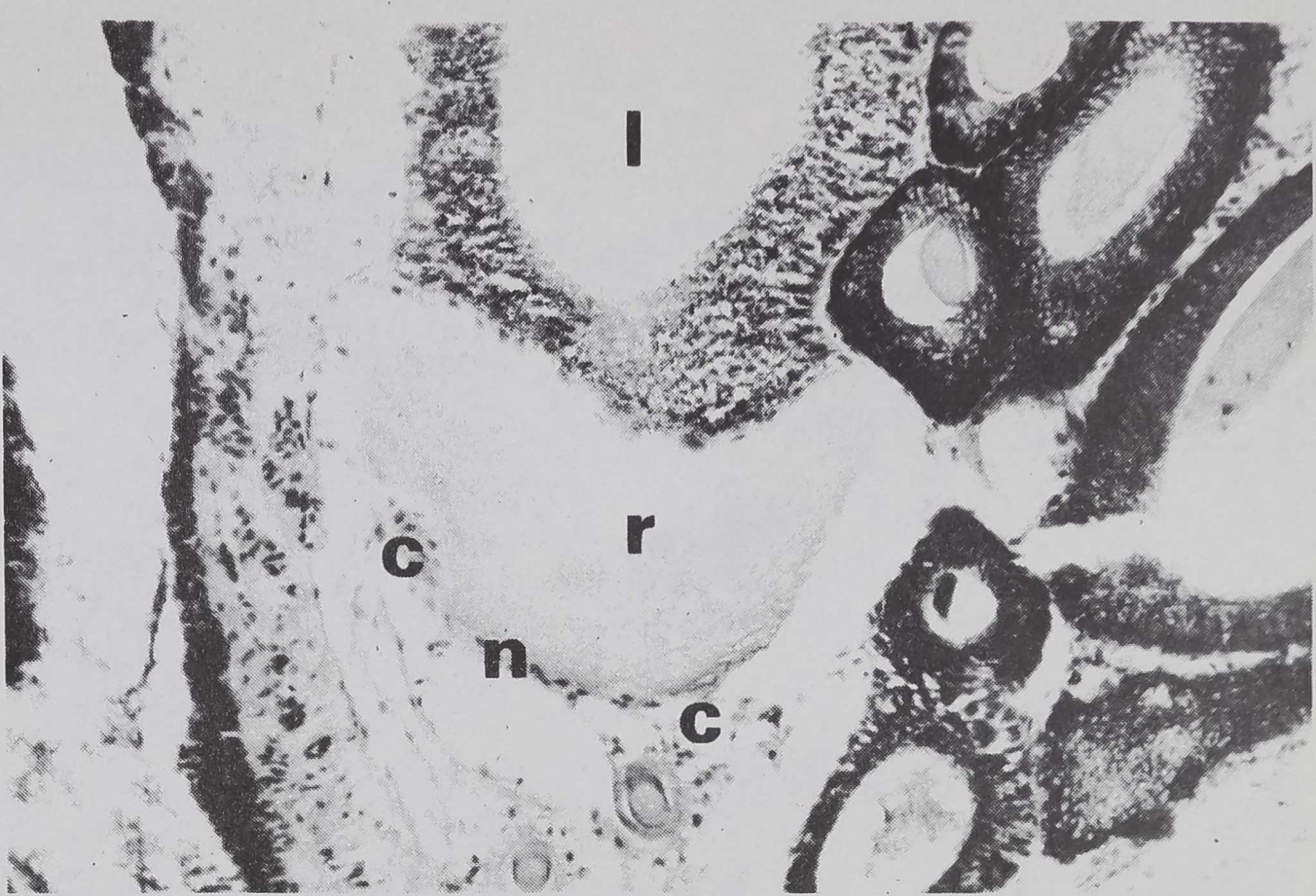 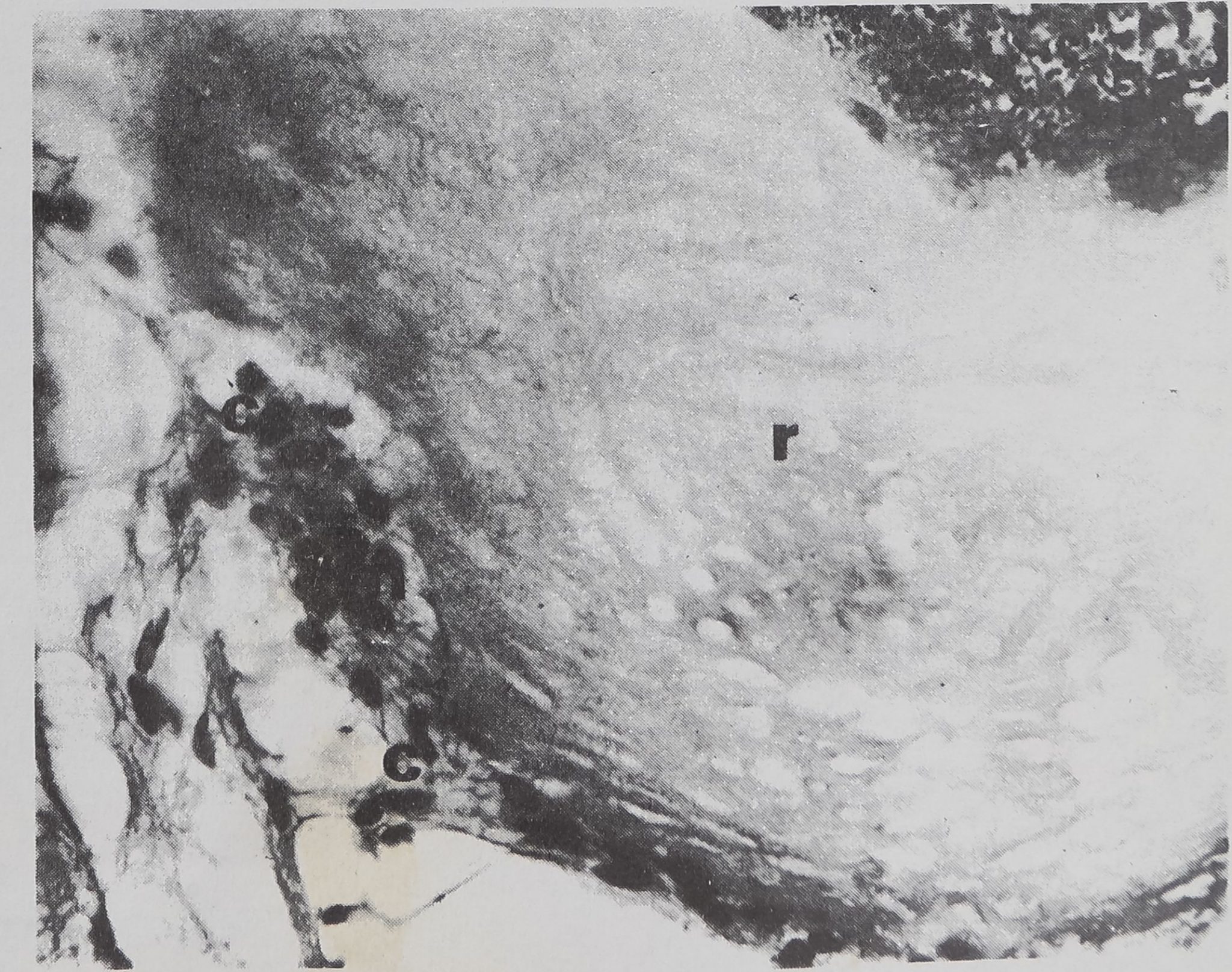 Last Friday and Saturday, a symposium on web-building spiders was held at the annual meeting of the American Association for the Advancement of Science in New York. In one of the papers, the author suggested a way by which a spider can know when it is running out of silk for its web

Figure 1. The ampullate gland of the spider is responsible for producing silk protein for the scaffolding of the web. Part of the sac portion of the gland, storing soluble, liquid silk protein in the lumen (1) is shown in this photograph. The coiled tail of the ampullate gland (t) is on the right. The structure that the author suggests is the receptor organ (r), responsible for keeping the spider informed as to how much silk is stored in the sac, is noticeably different from the normal epithelium (e). Magnification x 140

“Spiders lead lives bristling with difficulties and are always on the horns of a dreadful dilemma; no food without webs and no webs without food”.

The spider lives in a silken world. It catches‘its food in a silken web, swathes its prey in a silken bag, wraps its eggs in a silken cocoon, and wherever it goes it lays a silken thread. Throughout its life its contact with the outside world is via its silk. In the successful exploitation of this material, a structural protein, the spider has placed itself in the dilemma “no food—no web, no web—no food” expressed rather picturesquely by the French zoologists M. Andre and E. Lamy, quoted above.

Spiders economize on silk usage as far as possible by redigesting every scrap of silk. The provisional spiral of the web, for example, is eaten as the final sticky spiral is laid down. Examination of serial sections made of a spider just after the completion of its web shows that those silk glands which produce silk for the web are largely empty. The spider’s operating margin is small.

It is not surprising, then, to find that the spider will continue to build webs during periods of food deprivation at the expense of other body structures. Dr Peter Witt of the North Carolina Department of Mental Health, has found that web-building will continue until the spider has tost half of its original body weight, the webs becoming significantly smaller and more widely meshed. One important point in web building is that the spider must not run out of material before the web is completed. The last phase of web construction is the laying down of the

sticky spiral; without this the web is useless as a snare. Thus, in Witt’s starvation experiment, the spider avoided running out of material by making the web smaller and with a wider mesh. In this article I wish to consider the experiments which hint that the spider has a fairly precise idea of the amount of silk available to it, and to suggest a way that this might be achieved.

Beside the experiment already discussed, three other independent experiments are relevant. One approach has been to attach weights to the backs of spiders and observe the differences in web parameters. The first study along these lines was made in 1953, but the changes that occurred were not investigated thoroughly until ten years later, by Witt and his co-workers. They found that the spider used a thicker thread, presumably in order to hold its own now increased weight, but that the thread length was decreased by having fewer radii and a wider spaced spiral. Thus, the spider was able to complete a usable web. These changes were found in the first and all subsequent webs after the attachment of the weight. The adjustment of the web pattern to the new condition,^‘increased weight—shorter thread”, points towards a central mechanism of informational processing which is more than a reflex.

The second experiment was the oral administration of physostigmine (an anticholinesterase) to the spider. This drug stimulated the synthesis of silk protein, and the spider responded by using more silk in its web, especially in the construction of the spiral. Even more remarkable are the experiments of Koenig, repeated later by Witt, who continuously burnt out the last radii of the web. For a while the spider replaced these radii. Finally, however, it ignored the oversized angle and went on to building the spiral. Again, the spider appears to have information on the amount of silk available, and avoids the failure of web-building that would result if it continued to replace radii until the silk supply was exhausted. This experiment shows that the spider has a continuous feed-back of information on the state of the silk supply, since adjustment is made to a situation that arises during the actual building of the web.

The major question, of course, is how this feedback of information is mediated. It is highly unlikely that it is metabolic, since the rate of synthesis of silk is slow compared to the rate at which silk is used up during web building; the time of web construction is about 20 to 30 minutes whereas the complete refilling of the glands takes some six to eight hours. I decided to look for some type of mechanical receptor by examining serial sections of the abdomen of the spider, Araneus sericatus. The structure that I now consider to be the receptor is real; it can be readily located on

sections once one knows where to look for it. However, my interpretation of its function is, I Iconfess, still hypothetical.

Before describing this “receptor” in detail it is necessary to give a brief general account of the silk glands of the spider. The orb web-builder, A raneus sericatus, has five sets of silk glands. Each set produces a different silk protein for a specific purpose. The pyriform glands produce the silk for the attachment discs which are used to anchor the frame of the web. The aciniform glands make thé silk for swathing the prey, and the cylindrical glands the material for the egg cocoon. The two major sets of glands concerned with web building are the ampullate and aggregate glands. The am-pullate glands provide the silk for the scaffolding of the web. The sticky spiral consists of material from the ampullate glands coated with glue from the aggregate glands.

The only gland under further consideration here is the ampullate gland. This consists of three major portions, a long narrow duct, a broad sac portion, and a long coiled tail. It seems likely that the duct is of importance in the ordering of the silk to form a strong fibre. This process has not been studied in great detail, but it is known to involve the change from a soluble protein to an insoluble protein with a pleated sheet-like structure. The sac portion of the gland is largely for storage of the preformed protein in its soluble form, while the bulk of the synthesis of the silk takes place in the epithelial cells of the tail. The structure that is now to be described is found | in the sac portion of the gland.

The appearance of sections of the ampullate gland containing this structure is shown in the accompanying photographs. Figure 1 shows that the “receptor” is in contact with the silk in the lumen of the gland; in this section, the segment of the lumen in which the receptor occurs is just closed off from the main part of the lumen. In the next section however (not shown) it is clearly open. The appearance of the receptor is very different from the normal epithelium; the epithelium takes up a good deal of the dye hematoxylin whereas the receptor is stained largely with eosin. The receptor also has a striated structure. Cross-sections of the coiled tail of the ampullate gland can also be seen in this photograph.

Figure 2 is a photograph of another section of the same spider, 100 micrometers away from the section shown in Figure 1. At this stage, the receptor is not in contact with the lumen of the gland, but the peripheral nuclei of the receptor cells and the associated fibres can be seen. These features are seen more clearly in the higher-magnification photograph (Figure 3) of the same section.

Staining methods to show up nerve fibres are less than adequate in this spider. However, it has been possible to show, albeit rather poorly, the presence of fine nerve fibres in this connective tissue. At present there is no evidence as to whether these fibres lead to the receptor or away from it. By altering the focus of the microscope it is possible to track them from the receptor some distance towards the nerve bundle associated with the lungs. However, the photographic evidence for this is poor, because of the small depth of focus.

The structure described meets the requirements for a receptor to feed back information on the amount of protein present in the gland. The structure is found in the storage portion of the gland, where the silk is known to be in liquid form. The striated portion could possibly sense a change in pressure or tension, information which could be transmitted via the peripheral cells and nerve fibres to the central nervous system.

Rigorous proof of this function of the structure has not, as yet, been obtained. One approach might be to excise or destroy it surgically, and then check to see if feedback information has been lost. Obvious though this may seem, the practical difficulties to such an experiment loom large; the best possibility would seem to be laser surgery. However, the evidence so far does make a good prima facie case that this structure is part of the mechanism by which the information on the amount of silk available to a spider is fed back to its central nervous system.

Figure 2. A section from the same spider.