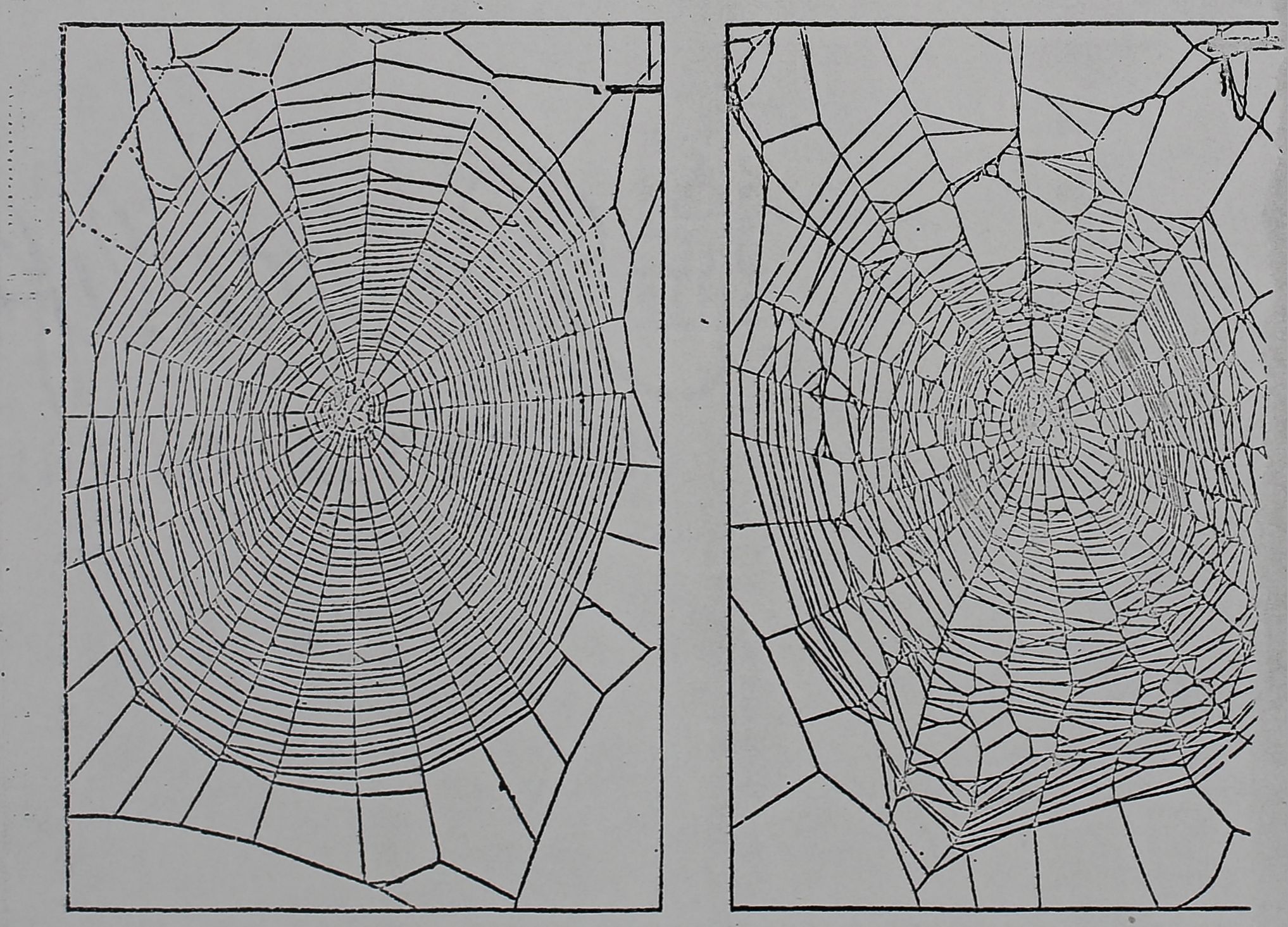 The common garden spider Is writing important messages to a psychologist and a pharmacologist (drug action specialist) that no other living creature can match for subtlety, nuance and reproducibility. And the last is the most important ©Jjatl,

The spider language has to be translated for Dr. Peter

–    N. Witt and Dr. Charles F. Reed by a modern, high-speed computer. That is because spiders write messages in the form of webs with 600-odd intersecting strands, each intersection a separate angle, each web a thoroughly geometric slice insect behavior.

For Dr. Witt, a German-born pharmacologist interested in pinning down chemical effects on the central nervous system, the spider has proven an ideal instrument and (..subject -for 15 years.

Dr. Witt explained his fondness for spiders, especially Arancus diadematus, to a reporter the other day. He said, *‘We pharmacologists are always looking for more eloquent members of the animal kingdom. Wire recordings of the brain waves of an anesthetized cat, the combativeness of Siamese fighting fish, and the restlessness of a mouse have all been used and are being used to show behavior changes produced by chemical compounds. But they are extremely crude compared with the fine variations in a spider’s web produced by drugs, leg amputation or by a tiny wound in his nervous system.”

–    nation of its eight legs for a spider to spin a web. When r we remove one of his legs, he loses his zest for spinning,.-

his spirals grow tighter and. his web smaller.”

Up in Syracuse, the two scientists have been feeding the two numbers representing each intersection of spiders’ webs Into a high-speed computer memory. The human eye and brain find it- impossible to make acute comparisons

of one web with another. But the computer, once primed, i can compnre them almost instantaneously.

All the scientists had to do was figure out a way of | designating the structure of a web. But if you look at the webs illustrated, you’ll see that they aren’t symmetrical.j That doesn’t bother Drs. Witt or Reed nor the spiders. , For the scientists, each Intersection of sticky protein ! spider thread has an angle.

Given suitable instructions, the computer and elec- j tronlc memory can compare the web of a closed or damaged < spider with the web of a normal one. For their tampering, 1 the scientists at the State University of Mew York in ! Syracuse use a laser, the fantastically narrow, hot beam of light that can burn its way through steel plate. Before -the physical scientists presented them with the laser a year or so ago, most of the spider work was done with 1 drugs—tranquilizers, barbiturates, and hallucination com- 1 pounds. Such experiments are still being run.

But with a laser beam. Dr. Reed and Dr. Witt can i burn out a tiny spot of spider nerve tissue a thousandth > of a millimeter in diameter, then watch what that docs to the Insect’s web making. The burned spot, or lesion, could be compared with the effect of a slight stroke in a human, ‘ the minor damage to a blood vessel in the brain that might -produce just a slight sag in one side of the victim’s face or a slight limp.

If the scientists used an. ultra-thin needle to make 1 the wound,- all of the spider’s vital juices would run out through the opening in its hard outer skeleton and it would soon die. But the laser cooks as it pierces. The hole is > sealed as it is made. And lenses can focus the laser beam of light at just the desired spot. (It doesn’t matter if the spider moves, because the laser beam does its job in just one thousandth of a second.)

What kind of symptoms do the Syracuse scientists look for? One has to do with adjacent angles on a spiral strand of web. Normally one angle of arc with a . ‘    –

thread doesn’t differ by more than four degrees f angles next to it. But if th. »eighth leg of the , removed, the computer has found that the adjacer may vary up to 21 degrees.

Dr. Witt explains: “It seems that the spider four pairs of legs to keep track of the strands o side of the one it is weaving. If one of those legs ing, the ability to be consistent is lost to some”

But the pharmacologist noted that the spide to be able to overcome this disability from time later relapsing Into seven-legged variety agai: scientists are exceedingly interested in this phem One of the biggest problems medicine faces is t that nerve tissue does not regrow once it has b stroyed. How then does man regain the use of arms after the spine or brain Is damaged? knows. But the spiders may help doctors find ou

Notwithstanding the benefits of tranquilizers mentally ill, there is still considerable controversy w say, Miltown, is totally different in its effect phenobarbetal. Dr. Witt obviously thinks his spidi provide the answer. Right now he can give 50 one drug and 50 spiders another, have new webs day, feed the web co-ordinates to a computer anc comparison on the following day. (Whether psych would accept such findings is another matter.)

In any case, the scientist believes he is quantil measuring behavior in a way previously impossible of his graduate students has even performed condi experiments on spiders and elicited some very c responses nobody thought possible for them.

Before Dr. Witt and Dr. Reed went off to lect graduate students at the Rockefeller Institute hen were asked whether any of their work indicates . have emotions or apprehensions as humans do.

Dr. Witt smiled a regretful smile. “Emotioi beyond our range,” he said.

The webs above teere woven by a normal spider (left), a spider with medium laser brain dc