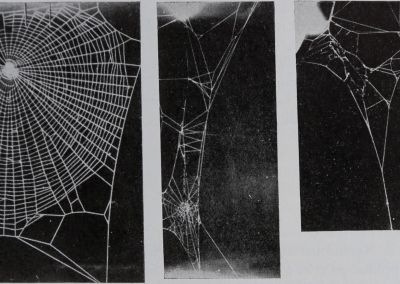 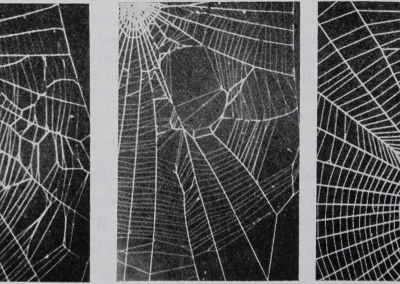 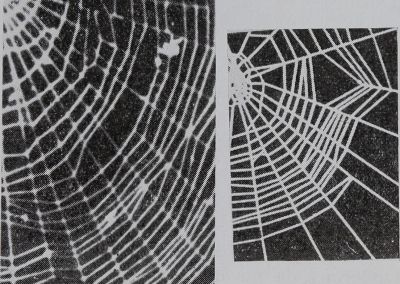 \ L’S DBM Pharmacology at the University of Bern

Comparing the effect of XYLOPROPAMIN AND pervitin TO Netzbau SPIDER (L)

Xylopropamin (i- (3 ‘, 4’-dimethyl-phenyl) -2-amino-propane), which was introduced as a component of the used to treat neurovegetative disorders “Esanin” (2) in the therapy and belongs to the large group of arylalkylamines who possess a variety of central and peripheral effects, as from the numerous indications of its representatives (adrenaline, ephedrine, tyramine, amphetamine, etc.) can be seen. It was therefore of interest, the impact character of the new substance, specifically to study detailed in terms of central effects. From the investigations of P ellmont ( i ) it can be seen that the preparation has easy central stimulant effects on rabbits and cats.

We now set the task of pursuing this central effect in special investigations and to compare the effects of this type with that known analeptics, especially the Pervitins and the caffeine. From Pervitin is known that it has led to repeated Abuses on extended use (2). But before such a question can be finally resolved by experience in humans, years may pass; because the domestic (*)

(*) The work was supported by the company F. Hoffmann-La Roche by out for help is best thanked and provision of Xylopropamins here. (2) protected trademark.

vidual variation of man in the response to drugs manifests itself particularly strongly in the central nervous system acting substances.

On the other hand, the value of animal experiments for testing of such substances has been questioned time and again when it was a question that should be concluded by the central nervous system effects in animals to a similar effect in humans. A time can be, if you have found an effect in animal studies, very difficult to read it, which malfunctions of this action are based. This shows, for example, the controversial case of tetraethylammonium (TEA) in its exposure to the fear: What an author (3) had interpreted as angstvermindernde effect of TEA, could put someone else (4) as a motor inhibition in rats of. In addition, the effect on the animal is usually caused by significantly higher doses per kg body weight, and you’re not sure if the animal is not a property of the substance shows that occurs entirely in the background in the effect on humans.

The animal experiment seems to me, however, to be suitable to compare the effects of substances together. One can examine the effect of a known and an unknown substance under the same experimental conditions in many individuals in a short time. If in such an analysis statistically significant differences in effect between the two substances arise, so it is unlikely that the two substances have the same effects on humans and the same targets. In this way, due to animal testing important assumptions about the effect of drugs on humans do.

Such considerations led me to apply the Xylopropamin spider and its effect on the network construction with the known effects of Pervitins (5, 6) and of various of caffeine compare. The central excitatory effect of xylose propamins Write W boar and P ellmont ( i ) : ,, A normal Numal- anesthesia of the rabbit can be (is the pressor dose of the cat 0.1 mg / kg iv) 10 mg / kg Xylopropamin subcutaneously, one by Dihyprylon (1) (700 mg / kg per os) bewirkter sleep by 35 mg / kg iv temporarily cancel. “The comparison of the anesthetic or sleep canceling dose with that brings the blood pressure to rise leaves, suggest that this substance the zentralanaleptische effect in overall effect picture recedes to the point that it must be clearly distinguished from pervitin in animal studies. (*)

The spider Zilla-x-notata Cl. is located in a wooden frame, which it is building a new network almost daily. This network can be made with ammonium chloride more visible and photographed proportion justice against a dark background. On the photograph, the proportions of the network are ausmessbar, and by comparison with a mitphotographierten scale they can be converted to the original size.

For details of the P eters and W itt (7) introduced method has on the work of S chwarz (8) and E pelbaum be referenced (9); More detailed information on test conditions and results to date are found in W itt ( io ). In addition to the mass numbers for Netzbauhäufigkeit, mesh size, number of oversized sectors / net, length / width, Winkelregelmässigkeit and hub symmetry used in Epelbaum the Klebfadenabstand was here nor measured because its regularity had proved disturbed as often characteristic in earlier experiments (11). This was done in the following way:

In the vergösserten on the original mass network photograph the distances of Anheftstellen the spiral threads were measured along three adjacent radii in the lower power supply. The difference between two adjacent intervals gives their difference, the average of all the differences found in this way is to represent the regularity of the spiral, even if the spiral pitches are small from the outside inwards (P eters 12). Such averages for two consecutive days compared with one another give the fluctuation the regularity from network to network again.

Not more than once 41ro week was given to the animals Xylopropamin in sugar water by mouth, with the application ran smoothly ever since all the animals so proffered drug like drinking. The administration was carried out at two different times, namely 6 and 10 hours prior to the network construction, since we characterized hoped to detect various stages of the impact. The fluid intake of an adult spider is known with about 4 mg, and by varying the concentration Xylopropamin (10 2 and 10 3) were two different doses, namely 40 and 4 y / animal, are examined in their effect.

The comparative analysis was performed before and after drug application by pairing between the masses of the networks of an individual. The values ​​of built under Xylopropamineinfluss

Network have been divided by the normal values ​​of the previous day, which resulted in unchanged proportions for each 1. Bigger irregularity is expressed by a number greater than 1, greater regularity through a number less than 1. The average of all quotients of the same measure number from all the networks that were built under the same conditions, could be compared using the t test with the theoretical value i.

In addition, it can be noted by looking at the pictures a network may not be detected by the mass numbers change. The interpretation of the changes happening due to the consideration that the network of rainfall an instinctive movement sequence is. The normal movement, which leads to the construction of the regular network is widely known, and from variations in the net can be closed on building behavior deviant.

The Netzbauhäufigkeit was on the 1st day after taking Xylopropamin 50% (controls 90%), as indicated by the x 2 test weak with 4.54 at 0.05 P = 3.8 and P = 0.01 6.6 as reduced could be saved; on the 2nd day it was also 50%, on the 3rd day it was the same as that of the controls. The size of the fishing areas fell from an average of 267.2 cm2 the day before to 134.0 cm2 the day after Xylopropamin what with a t = 3,916 with P representing 0,003 highly secured downsizing. The ratio of length to width of the retaining surfaces, the hub symmetry and the number of oversized sectors were found not changed detectable. In contrast was the Winkelregelmässigkeit the previous day average 2,06o and the day after, application 2,47o was, with t = 3,230 with P 0,009 highly secured

reduced; also the number of radii in the network had dropped on average 42 to strongly secured in the middle 33, a change that usually happens in parallel with the grid size (13).

In summary: we make 40 y Xylopropamin 10 hours before the network construction applied a likely reduced network construction Frequency, secure smaller networks with irregular angles and radii less fixed. Two of the most altered networks, which could be measured not at all more, are shown in Fig. 1 b and c compared with a prospective network (A bb . i a ) displayed.

a. uninfluenced network of Zilla-x-notata CI, b. and c. after each 40 y built Xylopropamin networks, as they are exceptionally observed (the scale is for all three networks of).

Under these conditions, no spider built the next day, so the Netzbauhäufigkeit was zero. Therefore, no power could be evaluated. The next day were the networks, as far evaluated, with no detectable changes.

This 38 tests were carried out. The Netzbauhäufigkeit was not diminished secured on the 1st day after Xylopropamin with 63% and on day 2 with 58%. The results of Netzausmessungen (averages of all tests) are shown in the table; the term “changes” the results of the T tests are registered; Here, a line a T value via P = 0.05, a number the * 47

given P value less than 0.01 (in the latter case is the result therefore strongly backed the previous day different).