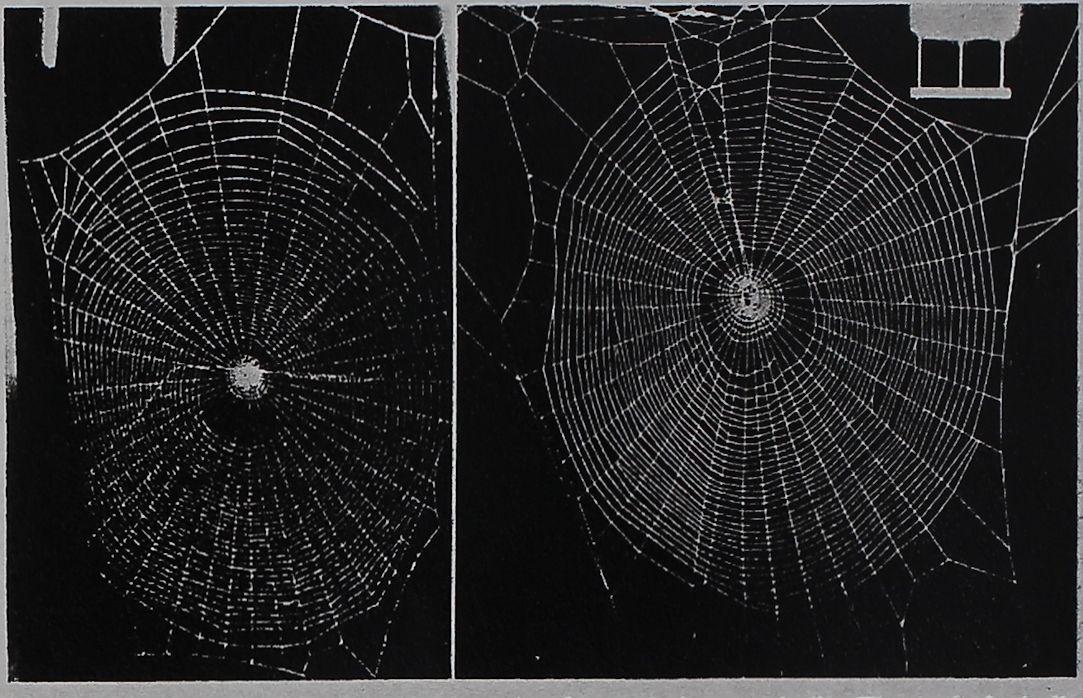 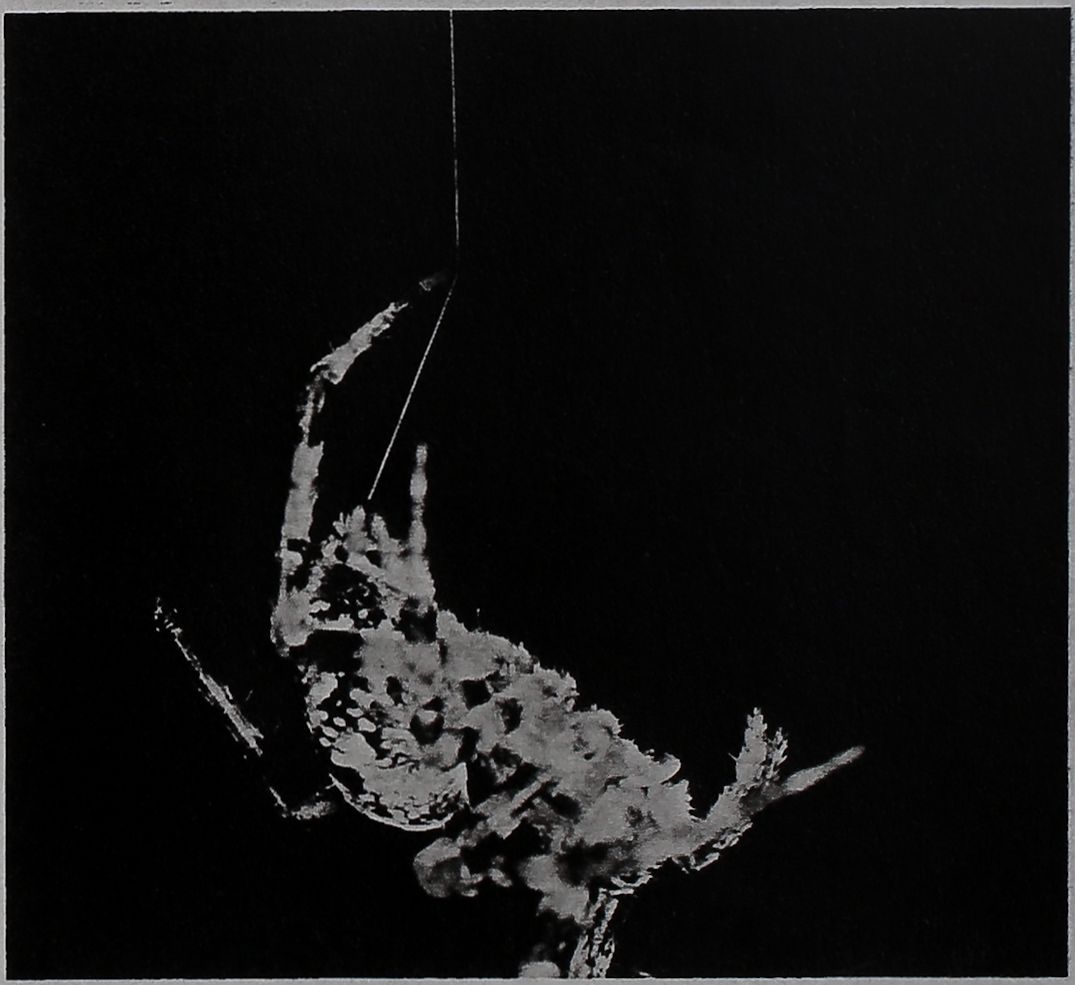 Progress in methodology leads to new insights into biological phenomena. Modern tools and methods—the digital computer, the ruby laser, the electron microscope, radioautography, incorporation of labeled amino acids into protein, enzymology, high-speed photography, and psychopharmaca-S have lately been used to study the biological problems of the web-building spiders. The tools are handled by researchers from very different disciplines: physicists, engineers, mathematicians, biochemists, zoologists, and be-haviorists. A symposium scheduled for 29 and 30 December 1967 during the AAAS Annual Meeting in New York Sfcity constitutes, to my knowledge, the first effort to bring together all these specialists who have worked on webbuilding spiders. It seems to be time to find out whether the parts of the picture can be fitted together.

The polypeptide silk is synthesized in the epithelium of five different sets of glands; the main scaffolding thread comes from the ampullate glands. The gland epithelium can be stimulated to higher extrusion—and subsequent new silk production—4n two ways, by emptying and through a cholinergic mechanism. The fluid silk passes through an extended duct and through a control valve which apparently regulates thickness and speed of thread extrusion through the spinneret. The last pair of legs of the animal pulls the thread up and attaches it at well-determined intervals to other threads so that the geometric pattern is formed. The sensory receptors, mainly located in the legs, which collect signals from the surroundings, as well as the central information processing system of the central nervous system, can be investigated from several angles. Behaviorally, we can postulate certain functions or a hierarchy of functions, and their integration at different levels. Anatomically we can try to match these with geographical areas in the nerve net. Experiments with interference in webbuilding through microlesions, drugs,

or more severe body damage explore the width of the behavioral repertoire. Perception of tension and vibration is dependent on the physical properties of silk. By probing a thread for the purpose of gaining information on its length and tension, the spider relies on the silk’s properties of high tensile strength and elasticity. An investigation of the tension distribution in the web provides information about the animal’s perceptual system. In addition to outside information, the long- and shortterm memory, stored presumably in the spider’s nervous system, influences the web pattern. Measurement of the speed of orientation in a turned-around web has shown a quicker adjustment of adult spiders reared without web-building experience, as compared to animals which built and used their webs daily. New information can be stored and its loss seems to follow a definite time curve. Rearing spiders under different conditions and watching their behavior permits one to recognize species’ specific patterns and distinguish them by web proportions which depend on the rate of growth, as measured in body weight and leg length.

The web as a trap for airborne prey is aided in its function by the trapper’s rapid manipulation and highly effective poisons. Such spider poisons are an attractive subject for biochemical studies, and aid the systematicist as well as the toxicologist. The prey-catching in the web can be traced back to simpler, stereotyped behavior patterns in varying nonweb builders. While most spiders exist alone, social spiders live and hunt together on one web. Social spiders show development of joint efforts in catching and peacefully dividing prey, as traced in measurements of distribution of radioactive-ly labeled insects. The geometric pattern of the orb web is particularly inviting for mathematical investigation. The computer has been used to handle analysis of the enormous amount of measures which can be extracted from one orb, and to print out statistical

comparisons of single measures in groups of webs of spiders treated in different ways. The computer has also been used to simulate parts of web building after making as few and simple as possible assumptions. Successful simulation of the pattern provides guidelines for further investigation of behavior. The example of the web shows that information gathered in physics and psychology and many other disciplines of science has to be brought together to increase our understanding of web-building spiders. Study of the complex geometric pattern in which polypeptide threads are spaced by an animal with the purpose of catching prey for sustenance in an expedient manner is a model for a multidisciplinary approach to the study of a biological problem.

omy of the Central Nervous System of a Large Indian Spider Poeciloteria.

John McCrone will serve as chairman and present introductory remarks.

Fig. 1. (Left) Web of a baby spider, the first orb it ever built. The web is built with less silk than that of an adult animal, and the total length of thread used is shorter. The geometry of the web in terms of exactness of spacing, as well as amount of detail, is indistinguishable from that in a web built by an adult. (Right) Web of an adult spider, Araneus diadematus Cl., as it is built daily in aluminum frames in the laboratory. The spider was driven out of the web at the upper left, leaving some slight damage behind. A computer-aided analysis of its geometry can be performed, leading to assumptions about the capacities of the central nervous system which steers legs into spacing the thread.

Fig. 2. Araneus diadematus Cl. lets itself down on a thread which’ is continually extruded from the spinnerest and guided by the last leg. The leg with a hook on its end can slow down the descent of the spider the regulate its balance. The glands are continuously synthesizing the polypeptide thread. Emptying of the gland results in speedup of new protein synthesis. [Photos by Peter N. Witt]