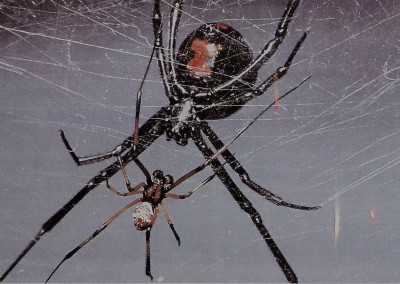 A bemused spider specialist recalls a recent telephone conversation with a woman who had succumbed to one of the nation’s lesser animal fads ^’keeping a tarantula as a pet. “She wanted it to walk upon her nude body,” die scientist says.

For generations, most people’s reaction to spiders was summed up by Little Miss Muffet, who ^9 as any tyke worth his Mother Goqse can tell you — was frightened away from her tuffet, curds, and whey by one. But today, spiders are a bit • more in fav.o’i.^

Spider-Man is a superhero. Charlotte’s Web, E. B. White ’s engaging tale of Wilbur the Pig and a lady spider of extraordinary web-weaving ability, has become a children’s classic. And large spiders, especially tarantulas, are being kept as pets.

Science, after decades of according spiders a limbo status of relatively benign neglect, is paying more attention. ‘ ‘Spiders do

The good earth is literally aswarm with them. Some 30,000 spider species are known, and experts estimate thousands more remain to be discovered. And not a one of them is an insect. Spiders are arachnids, cousins and kin to ticks, mites, and scorpions, and the men and women who study them are called, of course, arachnologists.

Spiders trace an ancient lineage. Their earliest ancestors appeared on earth long before mammals, long before the Age of Dinosaurs. Yet, until recently, science largely regarded theitf’as evolutionary curiosities Whose existence was of little consequence.

“They do not consume our food crops, which explains why they are not as well studied as insects,” says Dr. Ralph E. Crabill, Jr., of the Smithsonian Institution

in Washington, D.C. Nor do they appear to be a major factor in controlling insects that do destroy crops, although some recent studies suggest their pest-control contribué tions have been underestimated.

The new scientific interest is generated by findings that spiders play an important role in the balance of nature and that their behavior may eventually help us understand how a number of social animals, including man, have come to live together in relative harmony. And, notes Stollnitz, there is always ‘ ‘the inherent interest in learning more about the world we live in. ”

The 30,000 known spider species are a diverse lot in size, behavior, and habitat. Adults of some species measure only about one-eighth of an inch, while the bird spider of South America, which actually hunts and kills small birds, sports a leg span of 18 finches. –

All spiders walk on eight legs. All have

Arachnologists are discovering that spiders are not just creepy and^M\^!l® are fascinating critters with a lot to offer.

A female black-widow spider with her much smaller and harmless mate.

two major b Jy parts: basically a head and an abdomen. All produce silk. All are car-1 nivores. But alas for popular myth, all female spiders do not eat the male of the species after macing.

Authors of spenie» f içR» and ‘ hpi§|!jfe‘ stones have used spiders E- whiJH do look fearsome and ferocious under a microscope — as crawling sUpervillains .Kjjjm makers have ft itured them in Grade B movies with titles iproximating The Tarantula That Devoi ed Cleveland. This hasn ‘t helped the spider’s image. However. Crabill says that “99.9 percent of all spiders are harmless to man and his animals. “

Only two spiders found in the continental Uni ted States are deadly to humans: : the black widow and the brown recluse, fflpne black widow || found in all the contiguous states, more commonly in the South and West than in the North. Crabill describes it as “a shy and retiring spider that doesn’t go looking for trouble. ” The black widow ’s bite is excruciatingly painful. “Sometimes even moiphine won’t knock out the pain,’’ Crabill says.

. But at least a black widow’s bite can be treated; there is no effective treatment for a brown recluse If bite. This spider, sometimes called the violin spider because of a violinlike marking on its upper body, is found predominantlyftin the South, especially in the Gulf States, and in the West. Th< are far more to be feared than the U. S. tar; itula. Crabill explains:

‘ ‘All tarantulas native to the United States are not known to be hazardous to life, although diey will bite. As you get down into the New World tropics, some are extremely dangerous, and here is where you get into trouble frith tarantulas as pets. The only safe rule is: If you don’t know where it came from, don’t handle it. ||||

Although we instantly associate spiders with cobwebs, not all spiders weave their gossamer threads of silk into webs. One species, for example, hunts its prey by dangling a single thread whose end is tipped with a sticky substance and chemical that attracts moths. When a moth touches the silk thread it sticks, and the spider pulls up ■ff||neäl:. ■/

Spiders produce three basic types of webs. The sheet web is a two-dimensional layer of threads seemingly laid out at random. The space web is a three-dimensional, wispy structure. The orb web. by far the most familiar, is the two-dimensional cartwheel pattern into which Charlotte wove her words of praise for Wilbur.

|«ap~ you look at w b without the spider, or the spider without the web. you really don’t understand anything at all.” says Witt, ajov ialcendemai«H^apa£s|jfff to understand the ways Of.j MS a German-born medical doctor and silf-taught ^achiSlogist wire teaches zoology at North Carolina State University, and pharmacology atthe University of Nt-th and who serves as chistT )f mental-health research for North Carolii ‘s Department of Human Resources.

He began his work with spiders in 1948. At the time Witt was a clinical phafa macologist at the University of Tubingen in We§t Germany. A pÿlleague wanted Ek make movies of spiders building webs but was distressed because the creatures wove at 44PM- He asked if he coMldÉ^li a drug that would shift the spider’s biological clocks so that they would build their web it ! a more civilized hour.

Witt tried l^^ftailed, and the mode i9 picture project was dropped. But in Recourse of his experiments ,: Witt observed that under the influence of certain drugs, the I spiders wove some strange webs. He decided that spiders could provide insights into the effects of hallucinogens and other drugs on the brain. As a result Witt has delved deeply into die behavior of spiders and vastly expanded our knowledge about orb spinners and their webs.

Some of -his findings have even ama .*d other arachnologists.

“We have actually compared human building activities to spider building and we find an enormous amount of parallel between the ty|èj| Witt says. For one thing, just like their human counterparts instms building trades, orb spinners erect èËlloP of removable scaffolding as they weave their webs.

Orb spinners are solitary creatures v o dwell one to a web. The web is home, fc i source, and mating ground, and it is guarded aggressively. When a male arrives at mating time, the courtship ritual is an intricate set of advances and reneats until the female is final© won over and no longer kill; her would-be prompted a recent Bstie of Mosaic magazine, pubtishedrafoe National Science Foundation. to ponder ho w the spiders ever managed to mate.    an    o    I

Orb spinners each weave a new web every day, working in the predawn darkness and executing the distinctive pattern of concentric circles and radial lines in a half-hour or less, ggfii is nothing as important as web building, because without the web PÏnStêis nom^alywi’ sa vs.

First the old Ü§§ is rolled up su tried. Then :.ie new one is weaved from silk the spider pulls from its body with its feet. I|i!la|^^’0*nsfhe circular threads, the spidfer.liillns to silk at some 2/(10© points in 10 minutes. This: ;^wlves the spider’s pressing thread against thread with ||s’legs about three times; a second. “It is® fast you can’t see it at all; it just whirls® Witt s ys. “The thread fuses in a way that is compl tely unknown to us. ”

The orb spinners are masters at recycling, using and reusing their silk. Witt and David Peakall, then at Cornell University, “tagged” some spider webs with radioactive materials. Then they measured succeeding webs and found that 4b hours later. 90to 95 percent of the material in the radioactive web appeared again in a new web.

Npffiâ^spiders build exactly the same web. Indeed JWitt can tell which spider is whicl : in his laboratory by glancing at the web:. Each web is as unique as a human fingerprint. It took Witt 10 years of careful analysis to determine this.

There are some similarities between webs, however. “All descendants of one mother and father will build webs more similar to each other than compared to members of other families,’’ Witt says.

And webs show a spider’s age. Their characteristics change as the spider grows older, os surely as lines in a human face deep? ; as the years pass.

Th^ web, throughout the orb spinner’s life, serves the essential purpose of trapping winged insects and thus providing food. But the spider must act quickly if it is to dine well. A fly can free itself from die sticky iweb in only two or three

“The web, in a sense, is nothing but an extension of the animal, ’’Witt says|fi ‘It is a dap for food, and as such, it is built as eco-noi ically as possible. To explore the spider wit.tout exploring its web is to lose the best part of the story.”

Spiders have terrible eyesight. When a fly is snared, its struggling sets up vibrations in the web threads at frequencies the spider recognizes as a call todinner. The orb spinner speeds from its listening post at die web’s hub and paralyzes its prey with bites or by wrapping it in silk. Then the insect is injected with enzymes that digest its flesh and produce a broth, which the spider drinks. Although they are carnivores. the orb spinners exist on a liquid diet.

So Miss Muffet’s uninvited guest probably wasn’t after her curds and whey. V

Patrick Young is an award-winning science and medical wlite’fë. He does a terrific rendition of ‘ ‘The Eensy-Beensy Spider the Wèiterspout.’’